Search goes on for 4 fishermen, ‘vessel of interest’ 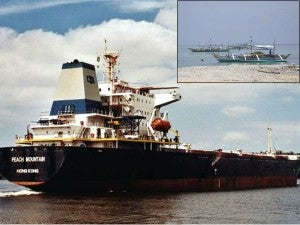 On Monday, the Philippine Coast Guard said only one foreign cargo vessel passed through the site of the accident on June 20, the Hong Kong-registered, 195-meter bulk carrier MV Peach Mountain. But after seeing a picture of the Peach Mountain in the Philippine Daily Inquirer, Herman Balmores, one of the survivors, said it was not the vessel that hit and destroyed his boat. Willie Lomibao/contributor

on June 20 continued Wednesday as local authorities in Bolinao, Pangasinan, faced the question of whom to hold responsible for the maritime accident that killed a fisherman and left three others injured.

Bolinao Mayor Alfonso Celeste said the municipal government wanted to bring charges in behalf of the fishermen and their families, but investigators had not identified the origin or the owners of the cargo vessel.

Survivors said their fishing boat, the 13-meter, two-engine AXL John, was struck by a cargo vessel that bore markings on the stern that read “Hong Kong” under which were markings that looked like Chinese characters.

A wooden boat, the AXL John had taken water from battering by huge waves and lost its engines, and it was tied to an artificial reef 144 kilometers northwest of Bolinao when the cargo vessel struck it at about 1 p.m. on June 20.

The boat was smashed into pieces. Of the eight fishermen who had taken it out to sea, four were rescued in waters off Ilocos Sur on Saturday. One of them died in a hospital in Vigan City on Sunday.

On Monday, the Philippine Coast Guard said only one foreign cargo vessel passed through the site of the accident on June 20, the Hong Kong-registered, 195-meter bulk carrier MV Peach Mountain.

But after seeing a picture of the Peach Mountain in the Philippine Daily Inquirer, Herman Balmores, one of the survivors, said it was not the vessel that hit and destroyed his boat.

Finding the hit-and-run vessel became a challenge on Tuesday, when the Philippine Navy announced that the Peach Mountain was not the only vessel in the area on the day of the accident.

Vice Admiral Alexander Pama, the Navy commander, told a news conference that 90 vessels went through the area 24 hours before and after the accident.

On Wednesday, Pama said the Navy investigation had not yet determined which of those 90 vessels could have been the one that hit the AXL John.

But the investigation was going on, he said, and it was not limited to Hong Kong-registered vessels.  “We are still analyzing the data, [which are] just coming in,” he said.

Celeste said he would consult with lawyers and seek advice from Malacañang before going ahead with a legal action.

Vic Javier of the Office of Civil Defense operations center in San Fernando City in La Union said the Coast Guard was scouring the West Philippine Sea using a helicopter and a tugboat in the search of the four missing fishermen.

Balilo said the southwest monsoon was pushing the current toward land so if the fishermen were hanging on to debris from their boat, they were being carried toward land. They would be found on land sooner or later, he said.

“We had stories in the past where our fishermen drifted all the way to Taiwan, Hawaii or even Indonesia,” Balilo said.

But the Coast Guard is not discounting the possibility that the missing fishermen may have been rescued by passing vessels, he said.

“But, of course, if they are really gone, we would just try to retrieve their remains,” he said.

The Coast Guard is proceeding to investigate to find the hit-and-run vessel. Balilo said the investigation was focused on the MV Peach Mountain as a “vessel of interest.”

Told that the Navy had ruled out the Peach Mountain and found that there were 90 other vessels in the area where the accident happened, Balilo said, “That’s the data of the Navy.”

He explained that the Coast Guard investigation is different from the Navy’s.

“We do not discount the possibility that other ships might be involved,” he said. But the Coast Guard investigation would start with the Peach Mountain as an eyewitness report had made it a “vessel of interest.”

Fred Castelo, Bolinao municipal administrator, said the search for the four missing fishermen had turned from search and rescue to search and recovery.

“Their families have accepted their fate and they just want to have their bodies recovered,” Castelo said.

But Celeste said he hoped that the missing fishermen had been picked up by passing ships and taken to their destinations.

“This actually happened here about two years ago when a fisherman who had been missing [for a long time was repatriated],” Celeste said. The ship that rescued the fisherman had taken him to the country where it was going, he said.