DFA: Kalayaan Islands ours, putting up school not new issue 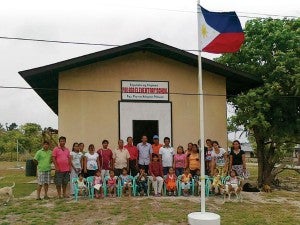 The Philippine flag flies in the breeze as Kalayaan town Mayor Eugenio Bito-onon (center) poses with the teacher, schoolchildren and their parents at the opening of Pag-asa Elementary School on a disputed West Philippines Sea island on June 15. AP/OFFICE OF KALAYAAN MUNICIPAL MAYOR

MANILA, Philippines—The Department of Foreign Affairs (DFA)  on Wednesday said that China should not make an issue out of the putting up of a school on Pag-asa Island in the West Philippine Sea, saying the Philippines has been occupying the area for a long time.

“Basically, the issue there is this is nothing new as far as structures in the area area are concerned. We have been occupying that area for a long time,” Hernandez said at a press briefing in the DFA.

Hernandez said the move should not be seen as aggravating the situation in the area, citing that the provision of a school by Kalayaan Mayor Eugenio Bito-on was part of his mandate to provide services to his constituents.

“The Kalayaan Group of Islands, including PAG-ASA is an integral part of the territory of the Philippines as declared in RA 9522 which is the Baselines Act and also in accordance with PD 1956 so it is very clear that this group of islands including PAGASA is ours.”

Hernandez said they were surprised with China’s statement, pointing out that structures like an airstrip and garrison, and the holding of elections in that area are proofs of our occupation in the area.

On Tuesday, Chinese foreign ministry spokesperson Hong Lei told a press briefing in Beijing that China “opposes any illegal activity that may infringe on China’s sovereignty,” referring to the putting up of the school.

Hernandez said that China’s claim of the Kalayaan islands is covered by the nine-dash line or the whole of the China sea, which has been seen as an excessive claim.

“As has been noticed by other governments, it is an extensive, excessive claim and that is why we have always wanted China to clarify exactly what features they are claiming,” he said.

Hernandez said DFA would wait for a formal complaint from China before acting on anything, saying parties should refrain from doing or saying things that would re-escalate tensions in the area.

When asked about the return of Chinese vessels inside the lagoon, Hernandez said DFA would ask for clarifications from China as to what happened.