Filipino food is ‘next big thing’ 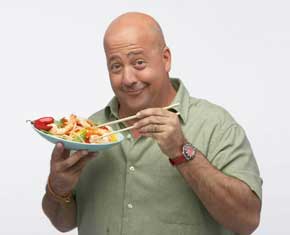 LOS ANGELES—Travel Channel foodie and “Bizarre Foods” host Andrew Zimmern believes in the next few years there’s going to be a cultural cuisine revolution in the US Filipino food, he says, is going to be the “next big thing.”

“I predict, two years from now, Filipino food will be what we will have been talking about for six months — I think that’s going to be the next big thing,” he told TODAY.com last week.

Filipino food has languished in the US mainstream market compared to its Asian counterparts.

Several years ago, even top Filipino chefs in a Los Angeles Times article were quoted about the difficulties of Filipino food assimilating into the mainstream culture.

One chef was quoted as saying that Filipino food is not visually appealing, since most Filipino dishes are stewed, brown and oily and fried.

“From my experience, non-Filipinos think our food is great,” said De Castro, in a previous interview with the Asian Journal. “We need more Filipinos to support Filipino cuisines especially in fine dining. Unfortunately, we are the last ones to support our community.”

But having Zimmern’s seal of approval may change the perception of Filipino food. With the success of recent Filipino chefs like Paul Qui, who won Bravo’s Top Chef: Texas and Sally Camacho, Top Chef: Just Desserts runner up, they are introducing Filipino flavors to their mainstream audience. Filipino food trucks, like the former Manila Machine, White Rabbit, and others in Southern California have been a big hit.

Zimmern believes that the mainstream is now ready to accept Filipino food.

“I want to go on record — this is not something that’s hot now somewhere and will get hot everywhere else,” said Zimmern, according to MSNBC. “It’s just starting. I think it’s going to take another year and a half to get up to critical mass, but everybody loves Chinese food, Thai food, Japanese food, and it’s all been exploited. The Filipinos combined the best of all of that with Spanish technique. The Spanish were a colonial power there for 500 years, and they left behind adobo and cooking in vinegar — techniques that, applied to those tropical Asian ingredients, are miraculous.”

Whether Zimmern’s prediction will be right, only time will tell.