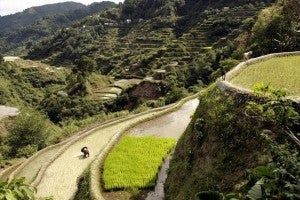 A farmer (bottom L) plants rice in a paddy field in the scenic Banaue rice terraces in the northern mountainous Ifugao province on April 16, 2008 that provides local rice supplies to villagers. AFP/TAMMY DAVID

The Philippines’ ancient rice terraces, carved into mountains like giant green stairs, have been removed from a UN list of endangered world heritage sites, the UN office in Manila said Wednesday.

The 2,000-year-old living cultural monuments were put on the World Heritage Committee’s danger list in 2000 at the Philippine government’s request to rally local and international aid, and for better management of their preservation.

“Both actions were successfully undertaken, leading to the conservation of the remote high rice fields,” the UN information office said in a statement.

The UN Educational, Scientific and Cultural Organisation (UNESCO) said it had extended $153,200 to aid Philippine efforts to conserve paddies it said were threatened by deforestation, disuse, climate change and earthquakes.

The terraces, located in five towns in the northern Cordilleras, were named as a UNESCO world heritage site in 1995, citing the need to preserve the traditions of terrace-building peoples in Ifugao province.

Jerry Dalipog, mayor of Banaue town, where two of the five terraced fields are located, said UN-assisted conservation efforts should drive tourist traffic to the sites by up to 30 percent.

“Once the tourists are convinced that there are still terraces left to see, more of them will come and visit us,” he told AFP in a telephone interview.

He said Banaue is set to complete by year’s end a four-month project to repair amphitheatre-shaped rice terraces in the village of Batad, one of the most famous sites, that had been disfigured last year by a huge landslide.

The repair works, estimated to cost 50 million pesos ($1.18 million), are being funded by the government and private donors, Dalipog added.

UNESCO describes the terraces as an “expression of sacred traditions and a delicate social balance,” which have helped create “a landscape of great beauty that expresses the harmony between humankind and the environment.”