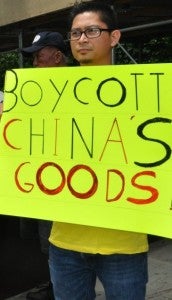 NEW YORK CITY—Dozens of Filipinos and Vietnamese Americans joined forces as they called for a boycott of Chinese products and urged Beijing to stop its creeping aggression toward countries around the West Philippine Sea (South China Sea).

“Boycott Made-in-China,” said Eric Lachica of the U.S. Pinoys for Good Governance, which organized the rally held June 22 in front of the United Nations headquarters.

China’s claims over the West Philippines’ Sea in the Panatag Shoal (or Scarborough) and over Vietnam’s Sea are a recurring dispute. Both countries maintain China has been violating international laws of the

Dr. Hoi Van Do, president of the Vietnamese community in Florida said his country and the Philippines are on the same side of the issue.

“Communist China dominates and takes over our islands and Scarborough Shoal of the Philippines,” he told The FilAm. “We are against them and we support you against them.”

Filipinos and Vietnamese leaders are slated to meet with the CEOs of major retailers like Wal-Mart, Costco, K-mart, Home Depot and others, urging them to stop selling Chinese-made merchandise. They said they would warn retail chains about communist China’s “imperialistic policies and undemocratic rule and widespread human and labor rights violations.”

Dr. Do and many rally organizers, such as Rene Ballenas and Bambi Lorica, pledged they were even willing to stay away from Chinese restaurants.

“We are global citizens scattered throughout the world who can mobilize and galvanize public opinion against China,” said rally speaker Joe Ramos said. “China’s export economy is very vulnerable.”

Lachica said the Boycott-China campaign will “change history,” harnessing the support of millions of Asian Americans. He said People Power in America could start with the 1.5 million Vietnamese in the

“If only one million of us, Filipinos, out of the four million will not buy Chinese products or goods just once a month, we will create a huge financial penalty on China. China will lose almost a quarter of a

He stressed Filipinos are not against Chinese people or Chinese American friends, but “if we value our economy and our freedom of labor, we should boycott and not buy Chinese communist products.”

He said further that the global community should close ranks against Beijing’s bullying and be made aware that the communist government is using its might to encroach on smaller countries like the Philippines and Vietnam.

“This is treachery, an invasion of Philippine territory,” Loida Nicolas Lewis, chair of the U.S. Pinoys for Good Governance, said in a statement. “Their (China) ships are still in the Panatag Shoal and continue to violate international laws. We want this issue brought to the United Nations International Tribunal on the Law of the Sea. China has refused to agree. China’s government is belligerent.”