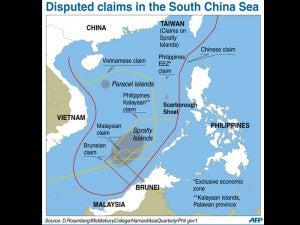 BEIJING—China said it has summoned Vietnam’s ambassador and strongly protested a law adopted by the Vietnamese parliament that places the disputed Spratly and Paracel islands under Hanoi’s sovereignty.

China and Vietnam, as well as other neighboring nations, are locked in long-standing territorial disputes over the West Philippine Sea (South China Sea), including the mineral-rich Spratly and Paracel islands.

“The… actions by the Vietnamese side are illegal and invalid. China expresses its strong protest and firm opposition,” foreign ministry spokesman Hong Lei told reporters.

Hong said Vietnam’s ambassador to China Nguyen Van Tho was summoned to the foreign ministry Thursday and told of Beijing’s displeasure.

According to Vietnamese parliamentarian Duong Trung Quoc, the legislation is a first for Hanoi on what it calls the East Sea.

“The adoption of this law on the sea today is very important for Vietnam,” he told Agence France-Presse.

“It helps solidify both how Vietnam will implement its sovereignty over the Paracel and Spratly Islands and its international commitments.”

Tensions in the West Philippine Sea have risen sharply recently, with China and the Philippines locked in a maritime dispute over Scarborough Shoal, a reef off the Philippine coast.

But tensions eased when the Philippines ordered two of its ships to withdraw from the shoal last week, a move that was welcomed by China.

The disputed region is a key trading route for the US, which has expressed concern over sporadic flare-ups between countries.

China also announced Thursday it had elevated the administrative status of the Nansha (Spratly) and Xisha (Paracel) islands from a county to a prefectural-level district, the civil affairs ministry said in a statement.

It was not immediately clear what the new status would mean for the islands, which boasted a total population of just over 500 people according to China’s census in 2000.