Killings of environmentalists on the rise; 50 killed in Philippines 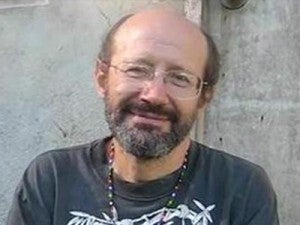 Rev. Fausto Tentorio is an Italian Catholic priest who fought against mining companies to protect the ancestral lands of the Manobo tribe in Mindanao.. Photo from PIME website

BANGKOK—The eulogies called Chut Wutty one of the few remaining activists in Cambodia brave enough to fight massive illegal deforestation by the powerful.

The environmental watchdog was shot by a military policeman in April as he probed logging operations in one of the country’s last great forests.

Nisio Gomes was the chief of a Brazilian tribe struggling to protect its land from ranchers. Masked men gunned him down in November; his body, quickly dragged into a pickup, has not been seen since.

Around the world, sticking up for the environment can be deadly, and it appears to be getting deadlier.

In the Philippines alone, 50 have died defending their ancestral lands from powerful industries.

The dead last year included Rev. Fausto Tentorio, an Italian Catholic priest who fought against mining companies to protect the ancestral lands of the Manobo tribe in Mindanao.

Affectionately known as “Father Pops,” he was buried in a coffin made from a favorite mahogany tree he had planted.

People who track killings of environmental activists say the numbers have risen dramatically in the last three years.

Improved reporting may be one reason, they caution, but they also believe the rising death toll is a consequence of intensifying battles over dwindling supplies of natural resources, particularly in Latin America and Asia.

Killings have occurred in at least 34 countries, from Brazil to Egypt, and in both developing and developed nations, according to an Associated Press review of data and interviews.

A report released on Tuesday by the London-based Global Witness said more than 700 people—more than one a week—had died in the decade ending 2011 “defending their human rights or the rights of others related to the environment, specifically land and forests.”

The death toll reached 96 in 2010 and 106 last year, said the report, which was released as world leaders gathered in Rio de Janeiro for a conference on sustainable development.

More than three-quarters of the killings that Global Witness tallied were in three South American countries—Brazil, Colombia and Peru. Another 50 deaths occurred in the Philippines. All have bloody land-rights struggles between indigenous groups and powerful industries.

Global Witness’ figures are much higher than those that Bill Kovarik, a communications professor at Virginia’s Radford University, has been compiling since 1996.

He focuses on slayings of environmental leaders and does not include deaths in protests that are counted in the Global Witness report.

“For many years intolerant regimes like Russia and China and military dictatorships tolerated environmental activists. That was the one thing you could do safely, until some crossed into the political area,” Kovarik said. “Now, environmentalism has become a dangerous form of activism, and that is relatively new.”

Both Kovarik and Global Witness believe even more killings have gone unreported, especially in relatively closed societies in countries such as Burma (Myanmar), Laos and China. Global Witness said there is an “alarming lack of systematic information on killing in many countries and no specialized monitoring at the international level.”

In Thailand, where at least 20 environmental activists have been killed over the past decade, seven hired gunmen were paid $10,000 to kill Thongnak Sawekchinda, a veteran campaigner against polluting, coal-fired factories in his province near Bangkok. Powerful figures believed to have ordered the slaying are yet to be apprehended.

In developing countries, bolder and more numerous activists have come into sharper conflict with governments and their cronies or local and foreign companies, some with low environmental and ethical standards.

These are moving in to “industrialize” areas where rights of the local people are traditional rather than clearly defined by modern laws.

“It is a well-known paradox that many of the world’s poorest countries are home to the resources that drive the global economy. Now, as the race to secure access to these resources intensifies, it is poor people and activists who increasingly find themselves in the firing line,” Global Witness said.

Julian Newman of the London-based Environmental Investigation Agency said the killings would only get worse because one of the key flashpoints—land ownership—ignited powerful passions.

“To people protecting their lands, their forests, it’s very personal, and they suffer when confronted with influential forces who have protection, be it the police in Indonesia or thugs in China,” Newman said.

Targeted assassinations, disappearances followed by confirmed deaths, deaths in custody and during clashes with security forces are being reported.

The killers are often soldiers, police or private security guards acting on behalf of businesses or governments. Credible investigations are rare; convictions more so.

“It’s so easy to get someone killed in some of these countries. Decapitate the leader of the movement and then buy off everyone else—that’s standard operating procedure,” said Phil Robertson, Asia deputy director of Human Rights Watch.

The countries where environmental killings are most common share similarities: a powerful few, with strong links to officialdom, and many poor and disenfranchised dependent on land or forests for livelihoods, coupled with strong activist movements which are more likely to report the violence.

According to environmental groups, it is time to build a comprehensive database of such violence and mount unified campaigns.