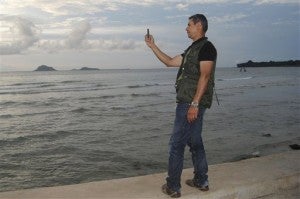 Interior and Local Government Secretary Jesse Robredo said here Wednesday that he wants Atyani banned from entering the country again for going to Jolo to interview the terror group Abu Sayyaf without informing the government.

Robredo said the authorities were able to confirm that Atyani was “somewhere in Patikul” together with his two Filipino crew members and that they were “safe and not threatened” by the ASG.

At present, he said, the government was adopting a “wait-and-see” attitude and hoped that Atyani would soon reappear together with his crew members.

And once Atyani emerges from his visit to the ASG, Robredo said, he will recommend to the Bureau of Immigration and the Department of Justice to ban the Jordanian journalist from entering the country again.

“If you imperil yourself and create problems for us, I think you should not be allowed in the country again,” said Robredo, who was here with President Aquino to a convention of the Autonomous Region in Muslim Mindanao at the Waterfront hotel.

Robredo told reporters that his recommendation was “for Atyani’s own good and security.”

He said that he was taking this stand because the government in the end was still responsible for the security of Atyani, whom he described at one point as “uncooperative.”

Robredo also made it clear that the government was even more concerned for the two Filipino companions of Atyani who were just hired by the Jordanian journalist.

Robredo said that Atyani was here to do a documentary that he described as a “Mission Impossible type.”

Robredo said President Aquino was aware of the developments in Atyani’s case.