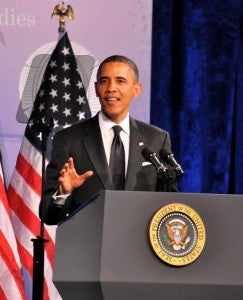 NEW YORK CITY—Aaron Enrick Gernarde, 18, had mixed feelings when he heard the news that President Barack Obama is putting an end to the deportation of undocumented students.

“Sana green card na agad,” he was exuberant at first and skeptical next. “Is that a sure thing. And then what?”

Aaron and his family came to the United States on tourist visas when he was 10. He studied at Flushing High School in Queens, played basketball in the park around his neighborhood and pledged allegiance to the American flag. He’s all-American but not on paper.

Aware of his family’s immigration status, he said he was afraid to go out of the house, even to go to school. Pulitzer Award-winning journalist Jose Antonio Vargas’ act of outing himself as an undocumented immigrant inspired him, he said.

Aaron is among the estimated 800,000 undocumented immigrant youth who will be given the opportunity to live and work in the US without the fear of deportation. Obama signed an executive order on June 15 allowing so-called Dream Act children to stay in the country without fear of being deported and enable them to find jobs. The government denied it is an act of amnesty and maintained it is “not a grant of citizenship.”

“This is a new policy that grants deferred action to undocumented youth who were brought to the US as children and who have been raised and educated as Americans in the US,” explained lawyer

Guerrero Yee. “This policy will allow thousands of eligible persons between the ages of 15 and 30 years old to apply for deferred action and US work authorization in two-year renewable increments.”

Many Filipino Americans welcomed the news.

“We do have students who will benefit from this policy,” community college professor Suzanne Lansangan-Sabangan told The FilAm. “After all it is not their fault that they got here in the first place.”

“This is really a happy day. We in the immigrants’ rights and labor community are celebrating the entry of talented and energetic youth into our workforce,” she said.

The National Federation of Filipino American Associations or NaFFAA commended journalist Jose Antonio Vargas for “taking great risks in calling attention to the plight of these young people.”

“As Vargas puts it, ‘They grew up here, they were educated here, and they have so much to give back to the country they call home,’” NaFFAA said in a statement.

The organization reiterated its call for Congress to pass the DREAM Act and “end the nightmare of a generation of young people who are Americans and deserve to have the basic rights that all Americans enjoy.”

Read Next
2 Malaysians charged with drug trafficking
EDITORS' PICK
Comelec won’t proclaim party-list groups yet
House energy committee chair Arroyo bats for cheap electricity
Duterte signs law giving rights, more protection to foundlings
Honolulu Café is the cure for your Egg Tarts and Roastings cravings
DOJ-led panel drops 29 cases of torture, EJKs
Luxe property: A way to build, preserve wealth
MOST READ
Heart Evangelista gets a ‘no’ from Chiz Escudero after asking, ‘Do I deserve a bag?’
Man posing as Marcos spox revealed to be an inmate in Bilibid — Guevarra
CebuPac places pilot under disciplinary review after ‘baseless’ post vs Robredo
3 Iloilo residents found with Omicron subvariant
Don't miss out on the latest news and information.