Military, US hospital ship to work in ‘largest humanitarian mission’ in Pacific 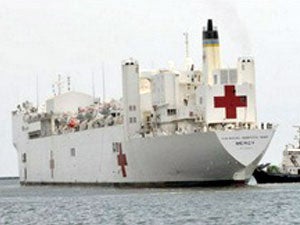 The berthing of USNS Mercy is seen at Manila's port on June 15, 2008. The ship, which is equipped with sophisticated medical equipment, is on a tour of various Philippine cities on a goodwill outreach mission providing humanitarian and civic assistance to the Filipino people. AFP PHOTO/Jay DIRECTO

MANILA, Philippines – The USNS Mercy, the United States Navy’s premier hospital ship, and another Japanese ship will visit the country to work together with the Armed Forces of The Philippines for the largest humanitarian mission in the Pacific.

“USNS Mercy is capable of rapid and mobile acute medical and surgical procedures with a total of 1,000 beds and can accommodate 200 patients per day. It is highly equipped in giving medical and surgical specialties along with basic medical services like immunizations, primary care, pediatrics, optometry, dental care, nutrition counselling, infectious disease treatment, endocrinology, gastroenterology, and dermatology, among others,” the AFP said in a statement.

Meanwhile, Japanese Ship Oosumi will join USNS Mercy on June 18 also in Calbayog City Port to support in its mission particularly in sealift and airlift operations. A team of 24 Japanese medical personnel will fly aboard a C1Japanese aircraft to Manila on June 17 and will join the main medical party aboard the USNS Mercy also on June 18.

Engineers from the AFP and the US will also conduct engineering civic assistance projects involving the construction and renovation of schools and a health center in Samar province.

The mission will be conducted in Catbalogan City and Calbayog City and the towns of Silanga, Gandara, Carayman, Veriato, Malaga, and San Isidro. Seminars will also be held in selected areas in Samar to prepare local residents against disasters.

The PP12, the largest joint humanitarian mission in the Pacific, stemmed from humanitarian initiatives following the tsunami that hit Indonesia in 2004 which killed more than 200,000 people. It is joined by partner nations including Thailand, Australia, M alaysia, Canada, France, Japan, New Zealand, Singapore, Korea, Chile, Peru, and Netherlands.

AFP Chief General Jessie Dellosa expressed his support for the humanitarian mission and the arrival of foreign contingents as it would “greatly help in preparing disaster-prone areas as well as in advancing the spirit of cooperation and collaboration in dealing with man-made and natural disasters.”

“As a country often besieged with calamities particularly at this time of the year, we have to ensure that our people, especially those in high-risk areas, are properly informed and prepared against disasters. We are very thankful to the USNS Mercy and the JS Oosumi for their valuable contributions in humanitarian and civic assistance programs intended not only to provide relief and temporary solutions, but more so in teaching the importance of preparation and precaution,” he said in a statement.