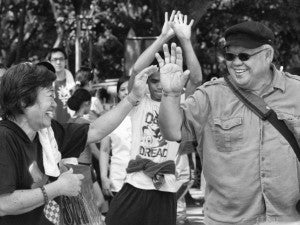 SAN FRANCISCO—It was around age 50 when Rick Rocamora decided he needed a change.

He gave up a lucrative career in sales with a major pharmaceuticals company and turned to a new passion: taking pictures.

Instead, the scenes in his photographs are, at times, grim and dark, the faces are solemn and sad, or if they are happy, it’s happiness borne of a determination to endure hardship, pain and even death.

The pictures draw you in, however. You stand to look and study, capturing the details and expressions of joy, pain, longing.  Obviously, capturing the images took hours, maybe even days.

In an age when photojournalism is fast-paced and scoop-oriented, Rick took it slow, engaging his subjects, showing them and their stories the full attention and respect they deserve.

I encourage you to check them out at the Cultural Center of the Philippines where the “With Passion and Purpose” exhibit showcasing Rick’s work opened on Wednesday, June 13.

Rocamora is a familiar name in the Bay Area. In the 1990s, as he was kicking off his new career as a photographer, he became known for documenting the lives of Filipino World War II veterans who moved to the United States in the 1990s after the beteranos were granted US citizenship.

His work helped draw attention to the plight of these elderly Pinoys who endured isolation, poverty and even abuse while struggling for the right to be treated with dignity in the United States.

Rick became their friend. When some of the beteranos got sick, Rick even cooked for them.

It was hard to miss him in those days. Like the beteranos, he became a regular on Powell Street near the famous Cable Car stop. One would see him, a bear of man with a mop of gray and white hair, almost always with a camera slung around his neck.

Rick has had quite an incredible run as a documentary photographer. He has won many awards and other recognition.

His story should even serve as an inspiration to Filipinos in middle age.

Starting a new career or venture in middle age is not exactly uncommon, especially in the U.S. But documentary photography is a tough field to go into – especially at middle age.

But Rick took it on.

In fact, he’s got some pretty bold ideas about middle age. “Everything after 50 is gravy,” he once told me. Recently, he also said, “I told myself, if I die after 50, I’m happy. I had 15 extra years now of doing this kind of work.”

And it’s been an impressive 15 year run as you would see at the CCP exhibit.

It’s interesting to note that he began his career as a documentary photographer by documenting the lives of seniors. For Rick turned 65 this year, officially becoming a member of the seniors club.

But Rick is not done.

His latest project also draws on connections between his photography career and his other life — as an activist against dictatorship.

Rick was a member of the US-based movement against the Marcos regime in the 70s and 80s. His new project is called “DARK MEMORIES of Torture, Incarceration and Death under MARCOS.” His goal: to photograph the survivors of the regime.

“This is to insure that their experiences will not be forgotten and also to make sure we as people will not allow again the imposition of martial law,” Rick said.

“With Passion and Purpose” will run through Aug 12 at the Pasilyo Vicente Manansala, CCP Main Theater building.  For more information contact the CCP Visual Arts & Museum Division at 832-3702 or email [email protected].

Those interested in participating in the Dark Memories project should send an e-mail to [email protected]. Rick Rocamora will give a talk on his work on June 21, 3-5 pm at the CCP.

Rocamora will also hold a lecture about documentary photography at Cultural Center of the Philippines. June 23rd 10-12am. Free admission