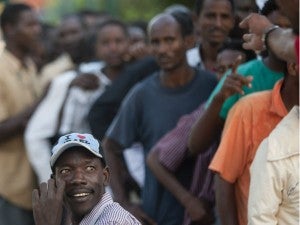 JERUSALEM—Israeli immigration authorities said on Thursday that they had arrested 300 African illegal immigrants since the start of a nationwide crackdown on Sunday and that the operation was continuing.

“Three hundred were arrested and more than another 300 signed a pledge to return voluntarily,” Population and Migration Authority spokeswoman Sabine Hadad told AFP.

She did not give a breakdown of nationalities, but said that the majority of both groups were South Sudanese.

“Those who signed were almost all from South Sudan,” she said. “Those who were arrested were mainly from South Sudan, but not only; there were also people from Nigeria, from Ghana, from the Ivory Coast, from Moldova, the Philippines.”

She said that the authority had now ended a week-long offer under which those agreeing to be repatriated receive a plane ticket and a grant of 1,000 euros ($1,250) per family.

The first planeload of South Sudanese to be sent back was to leave on a flight for the capital, Juba, on Sunday evening, Hadad said.

Israeli figures indicate there are some 60,000 Africans in the country illegally, most of whom are living in the poor neighbourhoods of south Tel Aviv, although up to a quarter are in the southern Red Sea town of Eilat.

Only a tiny fraction of them are from South Sudan, with rights groups putting their number at some 700, although Israeli officials say the number is at least 1,500.

Until last week, the South Sudanese were shielded by an Israeli policy giving them protection as a group from deportation.

But on June 7, a Jerusalem court overturned that long-standing policy, ruling that they were no longer at risk in their homeland and clearing the way for their mass expulsion.

Rising tensions over the growing number of illegal immigrants exploded into violence last month when a protest in south Tel Aviv turned ugly, with demonstrators smashing African-run shops and property, chanting “Blacks out!”

Israel, which reportedly backed South Sudan through its 1983-2005 war with Khartoum, recognised the new nation and established full diplomatic relations with its government shortly after it declared independence in July last year.

The Jewish state does not have relations with Sudan, which it has accused of serving as a base for Islamic militants.