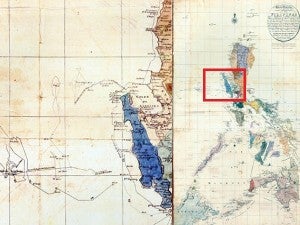 BAJO SCARBURO European cartographers named Scarborough Shoal as “Bajo Scarburo” in this 1820 map from the book “Mapping the Philippines: The Spanish Period.”

Old maps, which some government officials believe may hold the key to the Philippines’ claim to Scarborough Shoal in the West Philippine Sea (South China Sea), were the created by foreign missionaries and colonial explorers, making them “personal and unofficial,” according to a report posted on the website of the Chinese Embassy in Makati City.

The maps do not in any way represent the views of the government, said the same report written by Lu Yang, a Beijing-based scholar.

It cited a Philippine foreign ministry website article dated April 28, which said that a map drawn by a missionary and published in 1734 was one of the first maps that indicated that Huangyan Island is part of the Philippines.

China refers to the shoal as Huangyan Island while the Philippines calls the rock formation Bajo de Masinloc and Panatag Shoal.

The report said another map drawn by Spanish explorers in 1792 and published in 1808 in Madrid bared the path they took in arriving and sailing around the island. It said the Philippines may be hinting that if China can base its sovereignty claims over Huangyan Island on historical maps, so can it.

“But China can present a greater number of official maps to show its ownership of Huangyan Island. Even a Philippine citizen who wrote to (the newspaper) Manila Standard Today recognized the fact that China discovered Huangyan Island and drew it on a map as early as 1279 during the Yuan Dynasty (1271-1368). He said, ‘The old maps being relied upon by our

Department of Foreign Affairs in its spurious claim on the same territory were drawn up only in 1820, or 541 years after China’s,’” the report noted.

In his report, Lu also asserted that the official maps published by successive Chinese governments have always labeled Huangyan Island as part of China’s territory—“not as a matter of convenience, but to facilitate government.”

“None of international treaties that define the extent of the Philippine territory includes Huangyan Island as part of its territory. Apparently, the old maps referred to by the Philippines had no validity when these treaties were being drawn up. What’s more, for a long time, the official maps of the Philippines or maps published with official sanction, all marked Huangyan Island or Scarborough Shoal, as lying outside the territorial limits of the country,” Lu pointed out.

According to the author, the Philippine national map published in 2006 by the National Mapping and Resource Information Authority of the Philippines (Namria) positively placed Huangyan Island outside the limit of Philippine territory.

In April, Senator Edgardo Angara, who has a collection of ancient maps of the country, told the Philippine Daily Inquirer that old maps dating back to Spanish colonial times may hold the key to the country’s claim to Scarborough Shoal.

“It’s clear that Scarborough Shoal is part of our cartography during Spanish colonial times. We have maps reproduced from the original, made in 1734. During that time, Scarborough was already part of the Philippines,” Angara said.

Asked whether the maps would establish beyond doubt Philippine sovereignty over the disputed shoal, he said it’s one strong evidence but he had other pieces of evidence.

Meanwhile, another report posted on the embassy website cited several reasons why China has sovereignty over Huangyan Island:

• China “started astronomical surveying on Huangyan Island back in the 13th century.”

• In 1935, the Chinese government officially released the name list of South China Sea islands. Huangyan Island was included as a part of Zhongsha Islands. In 1947, Beijing released a new name list of South China Sea islands, where Scarborough Shoal was renamed Minzhu (or Democratic) Reef. In 1983, the Chinese government again released a name list of the same islands, which used Huangyan Island as the standard name for the island and Democratic Reef as its alternative name.