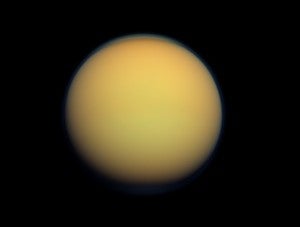 This image provided by NASA shows Saturn's largest moon Titan. A new study being released on Thursday, June 14,2012, suggests the presence of a hydrocarbon lake and several ponds near the equator of Titan, a surprise to scientists who thought lakes only existed at the poles. AP PHOTO/NASA)

LOS ANGELES—In a surprise find, scientists say they have spotted hints of a methane-rich lake and several ponds near the equator of Saturn’s biggest moon.

Lakes were previously spied near Titan’s polar regions. It was long thought that bodies of liquid could not exist near the tropics because they would evaporate.

“This discovery was completely unexpected because lakes are not stable at tropical latitudes,” said planetary scientist Caitlin Griffith of the University of Arizona, who led the discovery team.

By measuring reflected sunlight from Titan’s surface and atmosphere, the international Cassini spacecraft detected a dark region near the landing site of Huygens, a companion probe that parachuted to Titan’s equator in 2005.

Scientists said further analysis of the dark feature suggests the presence of a 927-square-mile (2,400-square-kilometer) hydrocarbon lake — twice as big as Lake Champlain, a freshwater lake that borders upstate New York and Vermont. Near the tropical lake were hints of four shallow ponds similar in size and depth to marshes on Earth.

The findings were detailed in Thursday’s issue of the journal Nature.

Titan is among the few bodies in the solar system with a dense atmosphere, but scientists have wrestled over the source of the thick blanket of nitrogen and methane. Methane gas in the atmosphere is constantly broken up by sunlight and falls to the surface where it is transported back to the poles, condensing to form lakes.

Scientists do not believe this process is driving the presence of tropical lakes and ponds. Rather, they think there may be an underground source of methane that periodically vents to the surface to form the hydrocarbon bodies of liquid.

“Titan may have oases,” Griffith said.

David Stevenson, a planetary scientist at the California Institute of Technology, said the latest find was interesting, but noted that the evidence was indirect.

If a subterranean source of methane is confirmed, it’s a step toward understanding the persistence of methane in Titan’s atmosphere, said Stevenson, who was not part of the research team.