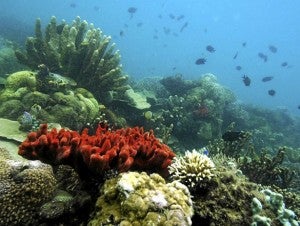 Coral reefs around the world are under threat from another round of bleaching as ocean surface temperatures are expected to rise later this year, according to a leading marine scientist.

Professor Terry Hughes, Australia’s foremost marine biologist on coral ecosystems, said massive coral bleaching was “entirely likely” in some reef areas, including Southeast Asia, due to the El Niño phenomenon, which is forecast to occur in the latter part of the year.

According to Hughes, the weather bureau in Australia sees a “50-50” chance of an El Niño, a weather pattern that results in dry spells, this year.

“If we get severe El Niño, there would be more bleaching, that is the expectation,” he said in an interview.

Hughes, convenor of the 12th International Coral Reef symposium to be held next month in Australia, was in Manila and Dumaguete last week to talk about the Coral Triangle Initiative and meet with local marine biologists.

Hughes noted that climate change was one of the main stressors on coral reefs, although some species were more prone to bleaching than others.

Coral bleaching happens when zooxanthellae, the protozoa that gives it coloration, dies—an indicator that the reef is under stress or dying. A change in temperature is often the main cause of bleaching.