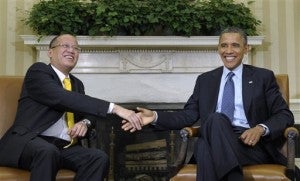 President Barack Obama meets with President Benigno Aquino Friday in the Oval Office of the White House in Washington. AP

WASHINGTON—The United States and the Philippines on Friday called for freedom of navigation in the tense West Philippine Sea (South China Sea) as the White House offered a robust show of support for President Benigno Aquino.

President Barack Obama welcomed Aquino to the White House in the latest high-profile gesture to put a focus on US ties to Asia, where a number of countries are embroiled in territorial conflicts with a rising China.

Addressing reporters next to Aquino in the Oval Office, Obama said the two leaders spoke about “trying to make sure that we have a strong set of international norms and rules governing maritime disputes in the region.”

In a joint statement released afterward, the two leaders “underscored the importance of the principles of ensuring freedom of navigation, respect for international law and unimpeded lawful commerce.”

Aquino and Obama called for diplomacy to resolve territorial disputes “without coercion or the use of force.”

China claims virtually all of the West Philippine Sea up to Southeast Asian nations’ shores and tensions have soared in recent years with both the Philippines and Vietnam.

The Philippines and China recently pulled back vessels after a standoff over the Scarborough Shoal, which lies near the main Philippine island of Luzon.

Secretary of State Hillary Clinton, toasting Aquino earlier Friday at a luncheon in his honor, credited Aquino with defusing tensions over the rock formation.

The United States and the Philippines signed agreements to step up cooperation on science and technology and to boost the number of Peace Corps volunteers in the former US colony.

But Aquino’s visit was largely symbolic, with many US policymakers believing that the son of democracy heroine Corazon Aquino has revitalized an often overlooked relationship by tackling hard issues.

Aquino recently won a major battle in his campaign against corruption with the sacking of the country’s top judge. Aquino has also agreed to let more US troops rotate — but not be based — in the Philippines despite the historical baggage.

“And I think that as a consequence of the meeting today in which we discussed not only military and economic issues, but also regional issues — for example, trying to make sure that we have a strong set of international norms and rules governing maritime disputes in the region — that I’m very confident that we’re going to see continued friendship and strong cooperation between our two countries,” he said.

Aquino said his meeting with Obama has “deepened and strengthened a very long relationship we have, especially as we face the challenges that are before both our countries in the current situation.”

Clinton and Obama both voiced support for efforts by the 10-member Association of Southeast Asian Nations to reach a code of conduct with China on managing disputes in the West Philippine Sea, through which half of the world’s trade flows.

Aseab and China agreed in 2002 to negotiate a code of conduct. But there has been little progress, with a rising China preferring to negotiate with each country individually instead of dealing with the unified bloc.

In the statement, Obama also pledged US support for Aquino’s efforts to upgrade the notoriously antiquated Philippine military and build a “minimum credible defense posture.”

The United States has stepped up military aid, including last year delivering a decommissioned coast guard cutter — which the Philippines rechristened the Gregario del Pilar and replaced a World War II-era vessel as its navy’s biggest ship.

The Obama administration has focused on building relations in Asia. In the next week alone, the United States will separately welcome the foreign ministers of Cambodia, India, South Korea and Thailand.