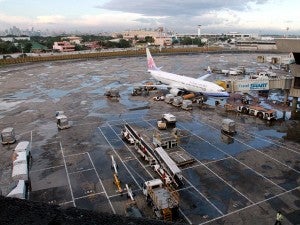 NO ‘WANG WANG’ CULTURE. In Philippine airport terminals, no special treatment is given. INQUIRER FILE PHOTO

MANILA, Philippines—Fall in line or fall flat on your face.

This was the warning raised by airport officials against travelers who jump the queue to get ahead of the others at the airport terminals.

“Naia (Ninoy Aquino International Airport) is a no wang-wang (siren) zone. Please fall in line to avoid embarrassment. CCTV-monitored area,” read the posters put up by the Manila International Airport Authority (MIAA) at the different queuing areas, particularly at the immigration counters, of Naia terminals.

The big signages bear the logos of the MIAA and the Department of Transportation and Communications.

“Wang-wang mentality” and “wang-wang culture” are catch phrases often used by President Aquino in his speeches that reaffirm his commitment to root out abuse of power. Initially, he used the term to attack the powerful who made their way through the streets of the metropolis with sirens blaring. In another speech, he deplored the use of the wang-wang as a symbol of a mind-set of privilege.

“The posters intend to convey a simple message. And that is to fall in line and follow routine and standard security practices at the airport,” MIAA General Manager Jose Angel Honrado told the Inquirer.

“This should serve as a warning to passengers not to cut [the] lines and follow airport procedures,” he added.

Honrado said the message capitalized on the popular street lingo for blaring sirens.

He explained that under the current setup and based on protocol, there are only a few government officials on official missions who are accorded airport courtesies during their departure or arrival.

According to Naia Terminal 1 manager Dante Basanta, no one is excused from waiting in line, especially at the immigration counters, except for the top five officials of the land and foreign ambassadors.

“Only the President, Vice President, Senate President, Speaker of the House, Chief Justice and the ambassadors of foreign embassies are exempted from lining up,” Basanta said.

Basanta added that all others who are given assistance by the airport’s Public Assistance Division would also have to queue up and have their travel documents processed by themselves.

“The assistance team will only guide the passenger as to where to go but in no way will hold the passenger’s travel documents,” Basanta added.

An airport official who declined to be named confirmed the existence of an illegal escort service being offered by enterprising airport personnel who usually victimize Filipino travelers.

Honrado said the stricter airport measures were also meant to get rid of these enterprising airport personnel, including some police officers, security guards and even porters who offer illegal VIP escort services for a fee.

“All airport employees caught offering or providing illegal escort services will be dealt with accordingly,” he warned.