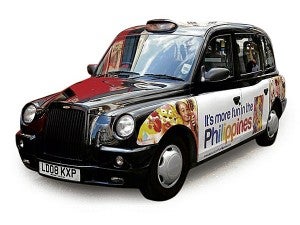 London’s iconic black cab, one in a motorcade led by Filipino officials on Tuesday, goes around the streets of London proclaiming that “It’s more fun in the Philippines.” The London promotion opens the country’s new tourism campaign that targets the millions from all over the world predicted to converge in the UK capital for the Queen’s jubilee feat and the Olympics. DFA PHOTO

LONDON—Marck Acres, who drives a London cab bearing the  Department of Tourism’s (DOT) “It’s More Fun in the Philippines” slogan, said the digital ad has caught the attention of some of his passengers.

“Passengers ask about it,” Acres told the Philippine Daily Inquirer in an interview at the parking lot of a  London hotel on Tuesday.

Acres said the 30-second digital advertisement, peppered with faces of smiling children,  has even got him interested in visiting the country “because it  speaks of lots of sunshine and happy people,” he added.

Acres’ taxi was one of 50 London cabs and 25 double-decked buses  fitted with the “more-fun” slogan in time for the Queen’s Jubilee celebration, London Olympics and the 2012-2013 season of the Fulham Football Club of the English Premier League.

President Benigno Aquino, who was visiting the United Kingdom, gave the  campaign a boost by posing in front of one such double-decker and with some of the cabs called in for a photo shoot at the Intercontinental London Park Lane Hotel on Tuesday.

Tourism Secretary Ramon Jimenez, who was beside Mr. Aquino and other Cabinet members waving more-fun flags during the shoot, said the UK is the country’s largest Philippine market for  European tourists.

Eddie Read, driver of a double-decker  which also bears the DOT ad,  said he had in fact visited the Philippines and tells his passengers about it.

“I tell them about how I enjoyed the karaoke and that I intend to go back there to go to Boracay,” the bus driver said.

Jimenez, in an interview at the sidelines of a Filipino community gathering Tuesday, said the President’s visit certainly boosts the tourism campaign which was timed for big events to generate more awareness of the Philippines as a top destination in Asia,” Jimenez said

Mr. Aquino, in his speech at that gathering, said he was confident that tourist arrivals (numbering about 400,000 a month since the start of the year)  would be sustained. With the campaign in place, it is expected to reach 4.8 million in 12 months.

The president was also hopeful that with every tourist arrival, a job for every Filipino would also be created.

The intensive tourism campaign, Jimenez said,  shows the seriousness of the government about it.

“The world will now start to see that ‘It’s more fun in the Philippines’ is not just words on a streamer,” Jimenez said.

The campaign is expected to enhance the country’s image as a top destination in Asia.

With London’s population of about 7.5 million and 1.5 million international visitors every year, “the Philippines is certainly generating awareness not only among the British population, but also among visitors to UK,” Jimenez said.

“Philippine tourism is poised to surge forward as we launch more aggressive initiatives to reinvigorate the industry and work towards achieving our 10 million target by 2016,” Jimenez said.