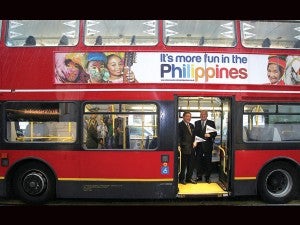 The country’s new tourism slogan, “It’s more fun in the Philippines,” is gaining more positive reactions among Filipinos since its launch in January this year.

Based on the results of a tracking survey conducted by independent research firm Ipsos ASI Philippines, the overall likeability of the Philippines’ tourism slogan even improved in March at 92 percent from only 87 percent in February.

These responses came from the 1,000 interviews conducted by the company in February and another 1,000 interviews in March, among Metro Manila respondents whose ages ranged from 15 to 64 years old. The campaign assessment is part of Ipsos AsiaBUS, an omnibus survey for Asia.

Of the respondents polled, 87 percent said in March that the tourism slogan remained “believable” as against the 84 percent of those who said so in February.

Uniqueness of the slogan was stronger in March with 82 percent of those who were polled believing so, as against the 66 percent in February. This improvement may be attributed to the fact that the issue regarding the similarity to Switzerland’s old tourism campaign may have already toned down.

This likewise confirmed the generally positive emotions that the tourism slogan evoked such as happiness and being proud as Filipinos, the company added.

“This tracking study shows and confirms the generally positive reactions to the tourism campaign. Tourism Secretary Ramon Jimenez Jr. and the Department of Tourism should be congratulated for a job well done,” said Carole Sarthou, managing director of Ipsos Philippines.

“Although it is a successful campaign for now, it needs to carry through the momentum and rally all Filipinos towards the tourism campaign to ensure long term success. That means the tourism slogan should be communicated via mass media channels, and not only through social network channels. The Filipinos are the strongest asset in selling our country and making visitors feel that it is really ‘more fun in the Philippines,’” Sarthou further said.

Ipsos Philippines pointed out that the initial success of the tourism campaign can be attributed to the “power” of the Internet and social networking sites such as Facebook and Twitter. The survey on the respondents in February and March this year revealed that these websites were the second main source of awareness next to television.