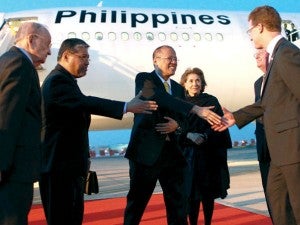 AQUINO IN LONDON President Aquino is welcomed by British officials, led by Baroness Rawlings (third from right), baroness in waiting to Queen Elizabeth II, at London’s Heathrow Airport on Monday for his official working visit to the United Kingdom. MALACAÑANG PHOTO

Fr. Dizon said using such big amount is scandalous and a grave sin considering there are many starving and jobless Filipinos.

He said the money should have been used to finance building of public-school classrooms, health centers, public hospitals and create job opportunities for the poor.

He also urged Aquino to make public the breakdown of expenditures in his business trip to justify the P87.1 million.

For the full report, listen to the attached audio clip from Radyo Inquirer.