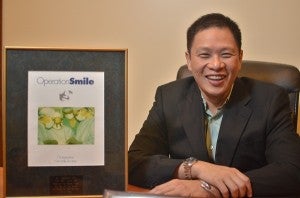 Doctor Laurence Loh shares his experiences as a volunteer plastic surgeon for Operation Smile. Loh has opened his own private clinic in Quezon City where he performs aesthetic and reconstructive surgery.

MANILA, Philippines—This globe-trotting Filipino plastic surgeon has performed more than 200 cleft-lip and -palate operations on children throughout the world, literally putting a smile on their faces.

Doctor Laurence Loh has been a volunteer of Operation Smile Philippines for 18 years, giving smiles to children worldwide who are afflicted with cleft palate, cleft lip and other facial deformities.

“Life is just more meaningful when God-given abilities and the skills you’ve developed are put into good use,” Loh said in a statement at the launching of his clinic. “I have a particular sense of advocacy for the kids of Operation Smile because it only takes over 20 minutes to perform a surgery that would change their lives. I intend to give back.”

In his medical missions throughout the world, he has gone to Colombia, the Gaza Strip, Nairobi, Kenya, Morocco, places he said that would “make the Philippines look like a developed country.”

Operations Smile’s missions have also brought him to some of the most underserved places in the Philippines like the provinces of Tawi-tawi, Basilan, Maguindanao, Jolo, Cotabato, Zamboanga.

He said that sometimes their patients were wary of having Filipino plastic surgeons work on them because they wanted American plastic surgeons, whom they thought were better.

“I’m proud to say that we have a very strong group of volunteers (in) Operation Smile Philippines that is very much in demand not just in the Philippines but all over the world,” he said.

Operation Smile was founded in 1982 after Dr. William Magee, a plastic surgeon, and his wife, Kathleen Magee, a nurse and clinical social worker, went back to the United States following a medical mission in Naga City in Camarines Sure, where they were only able to treat 40 patients out of 300 who needed reconstructive surgery.

They solicited donations of equipment and supplies and assembled a volunteer group of doctors to fulfill their promise to those who were left untreated in the first medical mission. Since then, Operation Smile has treated over 24,000 underprivileged children in the Philippines and over 200,000 children and young adults worldwide.

Loh is among the few accredited plastic surgeons in the Philippines. He is a member of the Philippine Association of Plastic, Reconstructive and Aesthetic Surgeons (Papras) and is also currently its national secretary.

His newly opened clinic, the Loh Institute of Plastic Surgery (LIPS), is located near the corner of Timog and Tomas Morato avenues in Quezon City.