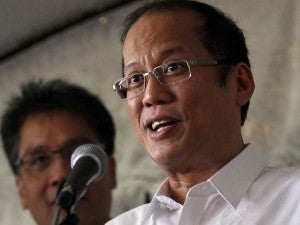 LONDON—President Benigno Aquino III has arrived here for his first official visit aimed at enhancing trade and diplomatic ties between the Philippines and the United Kingdom.

He was met at the Royal Suites of London’s Heathrow Airport by Lady Rowling, baroness in waiting to Queen Elizabeth II, Ambassador Nicolas Jarold and UK Ambassador to Manila Stephen Lillie, Philippine Ambassador to the UK Enrique Manalo and other embassy officials.

The President then went straight to his suite at the Intercontinental London Park Lane Hotel to rest.

Mr. Aquino will spend the next two days meeting with British Prime Minister David Cameron, Prince Andrew and other British officials. He will have no audience with the Queen, who is commemorating her 60th year reign with three days of festivities that started on Sunday.

Mr. Aquino arrived hours after a star-studded Diamond Jubilee Concert started at Buckingham Palace attended by the Queen and the members of the Royal Family, and more than 10,000 people.

On his first full day here on Tuesday, the President will have a series of meetings with top British investors and leading Filipino businessmen expected to result in a number of investments in energy and mining sectors.

“We expect signing of some very important business agreements, seven or eight companies be involved and I know that they will be covering such areas as renewable energy, gas, minerals etcetera,” Manalo had said earlier.

They include expected agreements between Rolls Royce and Cebu Pacific, Asea Gaz Asia Ltd. and Aboitiz Equity Ventures Gas Project, as well as with Shell and Nestle. The embassy has yet to release details of these business deals.

The highlight of the President’s visit will be his meeting with Cameron, the head of the British government, in the latter’s office at 10 Downing Street on Wednesday.

Later, he will have lunch offered by the Queen and hosted by Minister Jeremy Browne and the Lord Mayor of London Aldermann David Wooton who was a recent visitor to Manila.

On Wednesday, his last day here, Mr. Aquino would have a meeting with the Queen’s representative, Duke of York Prince Andrew at Buckingham Palace.

Mr. Aquino will be interviewed by the BBC and meet with the Filipino community on Wednesday. At least 250,000 Filipinos are working and living in the UK.

The President will also take part in a promotional activity for the Department of Tourism’s “It’s More Fun in the Philippines” campaign.

Shortly after his Buckingham Palace meeting with Prince Andrew, the President will leave Wednesday afternoon for Washington D.C. where he will have a meeting with US President Barack Obama at the White House.