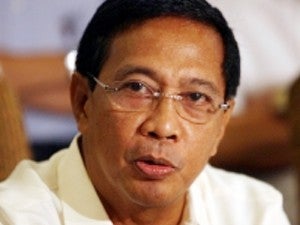 LOS ANGELES—Vice President Jejomar Binay said here Saturday (Sunday in Manila) that  he would bring to the attention of US Vice President Joe Biden the plight of Filipino teachers in Baltimore, Maryland, who stand to lose their jobs under a new teacher recruitment system based on an annual review of the job market.

“I will write a letter to the (US) vice president about (the teachers) issue,” said Binay, who met with some of the teachers in Washington, D.C. last Thursday. The presidential adviser on overseas Filipino workers’ concerns also told the media that he would strengthen the mechanisms promoting the welfare of OFWs.

Since 2005, more than 600 Filipino teachers have left their families and jobs in the Philippines for the United States, paying thousands of dollars to fill critical vacancies in special education, math and science classes. They were brought over on H1-B visas, which may be renewed once, but not for more than six years total.

So far, only 46 of 154 Filipino teachers whose work visas are expiring this year are assured of visa renewal. The others could lose their visas over the next five years under a system that uses an annual review of the job market to determine whether or not to retain foreign  teachers. Majority of these teachers are Filipinos who were recruited  between 2005 and 2009.

But militant groups were not impressed by Binay’s promise and accused him of being “disrespectful” of Filipino workers here after he “crossed their picket line” at the Hilton Los Angeles Airport. The Vice President was at the hotel Saturday night to attend a Philippine Independence Day celebration.

“It’s incredibly disrespectful of the workers who want to unionize and have better working conditions,” said Alex Montances, Southern California regional coordinator for the National Alliance for Filipino Concerns (Nafcon), whose members joined a protest outside the hotel.  Binay has “trample(d) on the freedom of Filipino workers here,” he said.

A hotel workers union, whose members include Filipinos, has called for a boycott of the Hilton LA Airport following labor disputes at hotels across the country.  The hotel is one of 13 airport-area hotels that are not unionized.

“Vice President Binay has practically crossed the picket line,” said Benjamin Leonen, a Filipino union organizer affiliated with the local that has been organizing workers at the hotel. The union has charged hotel managers with disciplining and harassing pro-union employees, a charge denied by the hotel management.

“This is a boycotted hotel and many of the workers are Filipino,” said Theresa Jaranilla, regional coordinator for Bayan USA. “We want to highlight the fact that these local worker issues are very much connected to the Philippine government’s labor export policy, which exploits workers.”