US military chief in Manila for talks 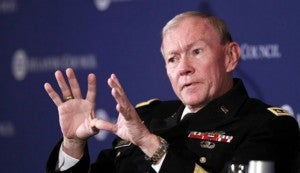 The chairman of the US Joint Chiefs of Staff, General Martin Dempsey, is in Manila for security talks with Philippine defense officials.

Dempsey arrived Sunday from Singapore, where high-ranking US defense officials attended a security forum to explain a new military strategy that would increase US presence in the region in coming years.

On Saturday, US Defense Secretary Leon Panetta announced at the forum that the United States would reposition its naval fleet so that 60 percent of its warships would be assigned to the Asia-Pacific region by 2020, compared to about 50 percent now.

Dempsey is meeting with General Jessie Dellosa, chief of staff of the Armed Forces of the Philippines (AFP), Monday morning for a discussion on  security.

The AFP had no information about the range of discussions between Dempsey and Dellosa.

But Colonel Arnulfo Burgos Jr., the AFP spokesperson, said the meeting was “important to further the [Mutual] Defense Treaty and to enhance bilateral relations.”

The US Embassy in Manila announced Dempsey’s visit on Sunday. In a statement, it said his travel to Asia included a stop in the Philippines “to meet with senior military and civilian leadership.”

“As treaty allies, the US and the Republic of the Philippines routinely consult and exchange views on a broad range of bilateral, regional and global issues reflecting on common values and interests,” the embassy said.

With the new US military strategy, Foreign Secretary Albert del Rosario on Sunday said the Philippines could expect a “greater number” of US warships coming to visit.

“We can anticipate a greater number of port calls [by US Navy vessels],” Del Rosario said in a text message to the Philippine Daily Inquirer.

The Department of Foreign Affairs (DFA) has said visits by US warships are covered by the 1998 Visiting Forces Agreement (VFA) between the United States and the Philippines. The goodwill visits are “part of the routine port calls that friendly navies make,” it said.

The VFA, the department said, is indispensable to the nation’s security.

Commenting on the new US military strategy, Del Rosario said “the increased presence of the US is consistent with its strategic guidance for the Asia-Pacific.”

The announcement of details of the new US military strategy came amid tensions between China and the Philippines over the disputed Scarborough (Panatag) Shoal in the West Philippine Sea.

Speaking at an annual security forum in Singapore on Saturday, Panetta said the US pivot to Asia was not designed to contain China’s emergence as a global power.

He acknowledged differences between the world’s two largest economies on a range of issues, including the West Philippine Sea (the Philippines’ name for South China Sea), saying “we’re not naïve about the relationship and neither is China.”

Panetta’s comments came at the start of a seven-day visit to Asia to explain to allies the practical meaning of the US military strategy unveiled in January that calls for rebalancing American forces to focus on the region.

The increase in American naval presence could raise tensions with China, where leaders have said they are unhappy with any larger US presence in the Asia-Pacific region.

Chinese Lieutenant General Ren Haiquan noted the US decision to increase the number of warships in the Pacific during remarks at the Shangri-La Dialogue security forum in Singapore on Sunday.

“First, we should not treat this as a disaster,” Ren said. “I believe that this is the United States’ response to its own national interests, its fiscal difficulties and global security developments,” he said in comments reported by Hong Kong’s Phoenix Television.

The United States is also moving troops around the region, with plans to base personnel in Guam and Australia.

On Sunday, Australian Defense Minister Stephen Smith welcomed the US plans for an enhanced naval presence in the Asia-Pacific, saying this should not impact Canberra’s relationship with China.

Smith, speaking shortly after his return from Singapore, said the US presence in the region had been “a force for peace and stability and prosperity since the end of World War II.”

“And we welcome very much the fact that not only will the United States continue that engagement, it will enhance it,” he told Australian Broadcasting Corp.

“The essential point is that none of this is done for reasons of trying to maximize or influence concern or threat; it’s all done for purposes of stability to continue peace, to continue prosperity.”

Panetta said the decision to gradually deploy more ships to the Pacific, along with expanding a network of military partnerships, was part of a deliberate effort to bolster the US role in an area vital to America’s future.

Australia will see 2,500 US Marines deployed to its north as part of the Asia strategy, a move that has rankled Beijing.

But Smith said when he traveled to China this week, he would make clear that Canberra wanted to continue to deepen its relationship with the Asian giant.

Panetta visited a deep-water Vietnamese port near the contested South China Sea on Sunday, calling access to such harbors critical as the United States shifts 60 percent of its warships to the Asia-Pacific by 2020.

Panetta flew to Cam Ranh Bay, one of Asia’s finest deep-water harbors located about 450 miles (720 km) south of China, just a day after he spelled out details of the new US military strategy

Speaking from the deck of the USNS Richard E. Byrd, Panetta said his visit was symbolic of how far the two countries have come since they normalized relations 17 years ago and that partnerships with countries like Vietnam were critical to the new US military strategy.

“We are rebalancing our forces to the Asia-Pacific … so that in the future, 60 percent of our forces will be located in this region,” he said.

“For that reason, it will be particularly important to be able to … work with partners like Vietnam to be able to use harbors like this as we move our ships from our ports on the West Coast toward our stations here in the Pacific.”

Under the strategy announced in January, the US military aims to be smaller, more flexible and agile. Rather than seeking permanent bases as it has in the past, it is focusing on rotational deployments.

“We are stressing our effort to try to develop partnerships with countries in this region, to develop their capabilities so that they can better defend and secure themselves,” he said.

As part of that, he underscored the importance of moving ahead with Asean—the Association of South East Asian Nations—to develop a code of conduct that the countries of the region could abide by in settling disputes and ensuring maritime and navigational rights. With reports from AP, AFP and Reuters