Trafficking of Filipinos in Haiti worsening 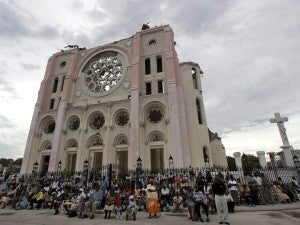 Parishioners gather in front of the earthquake damaged national cathedral during an outdoor Mass celebrating Mother's Day in Port-au-Prince, Haiti on May 29. AP

Human traffickers are running circles on Philippine authorities, despite a crackdown on the illegal deployment of Filipinos for non-existent jobs in earthquake-ravaged Haiti, sources close to FilAm Star said.

This is the grim assessment of Filipino Community (FilCom) leaders in Haiti and by Philippine diplomats, who have jurisdiction over Filipinos in Haiti, an impoverished nation of 9.7 million people in the Caribbean.

FilCom and Philippine Embassy sources said at least 40 more Filipinos have arrived in the Haitian capital of Port-au-Prince since the embassy exposed the illegal deployment of 26 workers last year, many of whom remain jobless or are able to find only part-time work, and at rates much lower than the $2,000 to $3,000 managerial posts promised them by the recruiters.

The workers are duped into coughing up as much as P500,000 in exchange for high-paying supervisory and managerial phantom jobs in factories and resorts.

“This is simply appalling,” lamented Marieflor Tuibeo, FilCom secretary said in an email to FilAm Star. “Some of those who have been here for months are still without jobs and now we are seeing more of our fellow workers coming. Something must be wrong here.”

Tuibeo said most of the new arrivals have avoided the old timers belonging to closely-knit Filipino community who were trying to reach out to the trafficking victims.

“Very often, these OFWs are trying to avoid us because we ask them a lot of questions and they probably fear that we would report our findings to the consulate or the embassy,” Tuibeo said in Filipino.

She said the FilCom has lost count because they just find out from fellow Filipinos about the fresh arrivals, who are being housed in groups by their recruiters and instructed not to speak with their fellow Filipinos who have been working legally in Haiti for years.

Ambassador Alfredo Maximo, charge d’affaires of the Philippine Embassy in Havana (Cuba), which has diplomatic jurisdiction over Filipinos in Haiti, said the recruiters are now deploying the OFWs by getting them tourist visas in nearby countries like the Bahamas. From there, they are given visas tourist visas, believed to be spurious, to get to Port-au-Prince.

“The recruiters have found a new way to deflect immigration scrutiny. They hide the true destination of the OFWs,” Maximo, who visited Port-au-Prince on May 15-22, said via email. “They bring them first to Nassau, Bahamas before sending them to Port-au-Prince, probably using fake stamped visas. Cuban immigration officials have found such fake visas in the past from OFWs who were coursed through Cuba by their recruiters.”

The ambassador said the recruiters falsify the Bahamian visa, including the signature of the Bahamian Consul in Havana, adding that embassy officials have already met with Bahamian diplomats in Havana to warn them about the current modus operandi used by recruiters to bring in hapless OFWs to Haiti via Nassau.

“Take note that the Haitian government does not require visas for Filipinos in the Caribbean who want to travel to Haiti as tourists. This loophole is currently being used by illegal recruiters to bring in undocumented workers to Haiti,” Maximo explained.

Maximo said they have already reported the suspected illegal recruiters to authorities in Haiti. However, the Haitian bureaucracy tends to be slow and it is saddled by the more urgent task of rebuilding from the devastating earthquake and its attendant challenges.

Maximo failed to identify the illegal recruiters, but other sources said some of the new arrivals were recruited by the group of Leo Maning, who has been reported by Philippine consular officials to Haitian authorities.

The same sources said another recruiter, a certain Armand Palisoc, is illegally deploying Filipino workers for non-existent jobs. Palisoc is said to be a US-based operator who moved to Port-au-Prince, after the earthquake last year, to recruit OFWs to Haiti.

“Palisoc also figured prominently in the recruitment of the 50 OFWs who worked for one year at E-Power (the Haitian power company) last year,” said another source, who requested anonymity due to the sensitivity of the issue.

“When said OFWs arrived in Haiti, they found out that they were receiving considerably less salaries than what was stipulated in their contract with their recruiter, a Korean company named DEECO, which has periodically surfaced in previous cases of illegal recruitment to Haiti, including that of Jesus “Jess” Laurenaria,” the source added.

Consular and community leaders, including Honorary Consul Fitzgerald Brandt, FilCom president Frankie Bagadiong and Filipino missionary priest Fr. Andrew Labatorio, are trying to reach out to the newly-arrived Filipino workers to ensure their safety and wellbeing.

Charge d’affaires Maximo said “the main selling point [used by illegal recruiters] in bringing people to Haiti is the impression that Filipinos over there have managerial and supervisory positions.”

That impression, of course, is wrong.

“Nowadays, finding jobs in Haiti is becoming very difficult as many of the newly-arrived recruitment victims have found out,” Maximo said.

Maximo admitted that the embassy or the Philippine government can only do so much without a formal complaint of a case being filed by the victims.

He added that so far, he is only aware of one case filed against the alleged perpetrators, but the case is not moving because the complainant is still in Haiti trying to look for a job.

Maximo was referring to the lawsuit filed by Laurenaria through her sister, Lourdes Laurenaria, in Manila.

According to Maximo, the embassy recently repatriated two of the trafficking victims — Edward Acosta and Joselito Miranda, who requested that they be returned to the Philippines.

Maximo and FilCom leaders said they are hoping Acosta and Miranda would file charges against their recruiters, so they could be prosecuted and sent to prison.

Still, Maximo said majority of the trafficking victims have chosen to stay in Haiti, trying their luck to find the increasingly any hard-to-find job “because they have already spent so much to get there.”