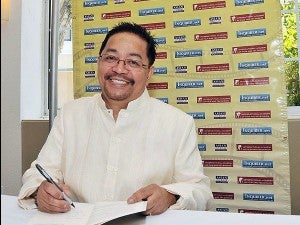 “My Filipino Connection: The Philippines in Hollywood,” the first book of Philippine Daily Inquirer (PDI) columnist and Los Angeles correspondent Ruben V. Nepales, will be launched in New York on Wednesday, May 30, 6 p.m., at the Philippine Center on 556 Fifth Avenue. Elton Lugay and Bessie Badilla will host the launch with the support of TOFA-NY and the Philippine Consulate in New York.

A collection of mostly published pieces that reflects Nepales’ advocacy to spotlight talents of Filipino heritage making it in the world entertainment stage, “My Filipino Connection…” had a successful, well-attended launch in Los Angeles that was presented by INQUIRER.net, the digital edition of PDI, and Asian Journal.

“Jazzipino” exponent Clamor, award-winning tribute artist Marshall and FASO (represented by a quartet led by music director and conductor Robert Shroder) performed at the launch held last May 19 at the CBS Studios in Culver City, California. Versatile performer Bernardo and 3D and pre-visualization artist Butiu were among the book’s interview subjects who also graced the launch.

Journalist Cristina DC Pastor wrote about the book in TheFilAm.net: “Through it all, Ruben, a Communication Arts graduate from UST, has maintained great rapport with Hollywood’s A-listers and the wonderful, creative people behind the scenes — Filipino and non-Filipino alike. For his beholden-to-no-one style of questioning, Ruben presents us with this beguiling collection of interviews with celebrities we can only admire on screen. It was Ruben who first introduced Hailee Steinfeld (‘True Grit’) and Camille Mana (‘Asuncion’) to our showbiz-loving community, and intimated that Quentin Tarantino is a Filipino B-movie buff who has been in the Philippines more times than he could keep track of.”

Nepales is a finalist in Los Angeles Press Club’s 54th Southern California Journalism Awards which will be handed out with Pulitzer-prize winning journalists Bob Woodward and Carl Bernstein in attendance on June 24. Nepales was also a finalist in the best columnist-print category in the 2011 National Entertainment Journalism Awards, a prestigious contest open to all U.S.-based-entertainment journalists.

Nepales is the first Filipino member in the 60-plus-year history of the Hollywood Foreign Press Association (HFPA), the media group that votes on and presents the annual Golden Globe Awards. He has served several times on the board of directors of the HFPA, a non-profit association of international journalists that has been cited for its philanthropic efforts. In March 2012, Nepales and his wife Janet, who is also a journalist and an HFPA member, turned over HFPA’s donation check of $25,000 to UNICEF Philippines to help in its long-term programs for children and families affected by Storm Sendong.

Nepales also serves on the board of directors of Search to Involve Pilipino Americans (SIPA), a non-profit organization that serves Filipino-Americans and other communities through youth development, health, economic and social services.

Nepales’ “Only IN Hollywood” is a popular column on PDI, the Philippines’ leading English newspaper and one of the most prestigious broadsheets in Asia. He is also a contributing editor of Balikbayan, a magazine published by Asian Journal Publications, Inc. and distributed in the U.S. and the Philippines.

An alumnus of the University of Santo Tomas (UST), Nepales received UST’s highest alumni award, The Outstanding Thomasian Alumni (TOTAL) Award in Media, last March 2012. He was one of UST Faculty and Arts Letters’ inaugural AB Gantimpala Awardees (for Media) in 2010.

Nepales is a proud native of Calasiao, Pangasinan. He and Janet have two children, Bianca Nicole and Rafaella Angelica.

“My Filipino Connection…,” published by Anvil, is available at National Book Store and Powerbooks branches in the Philippines. To RSVP to the New York launch, call (212) 417-0419 or via email, [email protected]