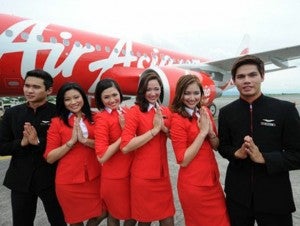 AirAsia Philippines was to have launched a daily Macau service in July, but then the market outlook dimmed, its chief executive Marianne Hontiveros told Agence France-Presse.

“I was advised that travel agents in Macau had cancelled tour groups to the Philippines,” she said.

Last month Chinese travel agencies announced they had suspended tours to the Philippines, under government orders.

The suspension came amid a stand-off between Philippine and Chinese vessels at the shoal in the South China Sea, which is claimed by both countries.

The dispute broke out in April when Chinese government ships blocked Philippine vessels from arresting Chinese fishermen there.

Hontiveros said the AirAsia unit has not set a new timetable for launching its Macau service, which it had envisioned as a gateway for Chinese tourists visiting the Philippines.

AirAsia Philippines, which only started flying in March, using the Clark airport north of Manila as its hub, is still planning daily services to Hong Kong starting in July, said Hontiveros.

The airline now serves popular vacation destinations in the Philippines and is due to begin international flights to Kuala Lumpur later this month.