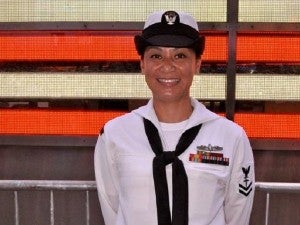 NEW YORK CITY—Times Square was a sea of white this week as about 6,000 sailors, Marines and Coast Guardsmen flocked to town for the annual Fleet Week tradition.

The FilAm spoke to some of the Filipino servicemen. One of them was Eileen Dueno, a hospital corpsman in the Navy.

“For me Fleet Week is celebrating the Navy and showing the world that we are here and we’re here to protect,” she said. “There are service people out there protecting the country, fighting our freedom, it also shows people who we are and that there are girls in the military also.”

The Manila-born said she joined the service for its nursing program.

“Right now I’m just enlisted as a corpsman, but the training will help me to go to nursing school,” she said. “I want to make this a life career. It’s fun, the training wasn’t hard as long as you’re physically prepared. There’s a lot of running, push-ups and sit-ups.”

It is Eileen’s first time to New York. She has been stationed since 2008 in Norfolk, Virginia; her parents—both working nurses—are in Culver City, California.

“Being Filipino, family always comes first,” she said. “The biggest challenge is being away from your family, and not being there for stuff like cousin’s birthdays, weddings and births of niece and nephew. Other than that, I think mentally and physically even being a Filipino is not a challenge because we know already how to work hard and we know how to follow rules. I think that’s what makes it easier especially being raised by both pure Filipino parents.”

She recalled how her parents had difficulty letting her go to join the military.

“I think being from the Philippines and not knowing the Navy, they were very hesitant and they were supportive, but they didn’t understand why and so I had to make them understand,” she said. “Over the years they understood much better.”

Fleet Week was open to the public to witness the latest capabilities of the Navy, the Marine Corps and the Coast Guard. It includes military demonstrations and displays, as well as public visitation of the participating ships.

This year’s Fleet Week also commemorates the Bicentennial of the War of 1812 and “salutes all sailors and Marines who fought gallantly in that conflict,” says the press statement.

Jeffrey Legazpi, a surgical technologist, said being in the Navy has been his “childhood dream.”

In 2004 he came to the US and worked as a nurse in Florida after graduating from UST. Three years later, he joined the Navy to fulfill his dream.

“Since the US military doesn’t recognize my Philippine degree, I didn’t enter the service as a nurse practitioner,” he said. Instead, he studied to be a surgical technologist and underwent “extensive” military training.

“It was extensive. They crash you down but build you up physically, mentally to become a new person, a soldier. I was about to give up the first couple of nights during the eight-week boot camp but thinking that I am a married man with one child, I pursued it with strong determination,” he said.

Jeffrey echoed Eileen when he said one of the biggest challenges is being away a lot from family. Though the pay is not that much, he said the benefits are rewarding.

“When people see you in uniform walking around, they thank you for your service, and that means a lot to me, it goes a long way,” he said.