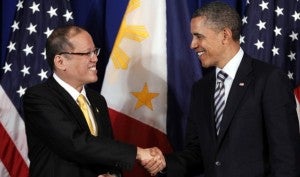 President Barack Obama meets with President Benigno Aquino III on the sidelines of the Asean and East Asia summit in Nusa Dua, on the island of Bali, Indonesia. AP

WASHINGTON, DC—US President Barack Obama will welcome President Benigno Aquino III next month, the White House said on Friday, as the United States steps up support for an ally locked in disputes with China.

Obama will hold talks with Mr. Aquino at the White House on June 8, the latest sign of a growing alliance after a rare joint visit to Washington by the Philippines’ foreign and defense secretaries at the end of April.

“The Philippines is a longstanding friend and ally of the United States, and the President looks forward to discussing with President Aquino the close strategic, economic and people-to-people ties between our two countries, and our cooperation in the Asia-Pacific region,” a White House statement said.

“The two leaders will also discuss ways to deepen bilateral cooperation,” it said.

“In all likelihood, Philippine-China relations will be discussed during the meeting,” he said.

The Obama administration has put renewed focus on Southeast Asia, stepping up ties to the economically dynamic region where several countries are embroiled in territorial disputes with a growing China.

The Philippines has had particularly rocky relations with China. The two countries have both been posting nonmilitary ships in the disputed Panatag (Scarborough) Shoal to exert their claims over the group of rocks, reefs and small islands about 220 kilometers (132 miles) from the Philippines.

The Philippines says the shoal falls within its 200-nautical-mile exclusive economic zone (EEZ), giving it the right to exploit the natural resources in this area.

The US has been helping to upgrade the notoriously antiquated Philippine military and Mr. Aquino has agreed to let a greater number of US troops rotate through the country.

But both the Aquino and Obama administrations have said that they do not plan a permanent military presence in the Philippines, which would be a politically sensitive issue in the former US colony.

Foreign Secretary Albert del Rosario and Defense Secretary Voltaire Gazmin flew to the United States for the meeting with US Secretary of State Hillary Clinton and Secretary of Defense Leon Panetta.

The Department of National Defense said the meeting was intended to be a consultation on defense, security, political and economic policies between the two countries.

The DND said Clinton had proposed the ministerial consultation when she visited Manila last year for the commemoration of the 60th anniversary of the Mutual Defense Treaty between the Philippines and the United States.

According to the DND, this was a sign of the deepening relations between the two allies. It said the meeting was the first of its kind in the history of Philippine-US relations, noting that the United States had this kind of consultation only with Japan and South Korea.

Clinton, following the 2+2 meeting, said the US would not be taking sides in the Panatag Shoal dispute but added that the US would continue to provide additional support for the Philippine military.

Last Wednesday, during a hearing of the US Senate foreign relations committee, Clinton and two Democratic senators criticized China’s claims in the West Philippine Sea (South China Sea). Clinton said China’s claims in the strategic waterway exceeded what was permitted by the UN Convention on the Law of the Sea (Unclos).

Obama administration officials and top military leaders are pushing for the US to join the 30-year-old Unclos, warning that Washington’s failure to ratify Unclos weakened its support for US allies in the disputed waterway and put the US military at increasing risk of confrontation with China.

Clinton told the Senate committee hearing that as a nonparty to the Unclos treaty, the United States was ceding the legal high ground to China and putting itself on the defensive.

“We are not as strong an advocate for our friends and allies in the region as I would like us to be, and I don’t think that’s any place for the world’s preeminent maritime power to find ourselves,” she said.

China, which is among the more than 160 nations that are party to the convention that was concluded in 1982 and has been in force since 1994, has made expansive claims in the South China Sea based on ancient maps. AFP with Norman Bordadora and Tina G. Santos