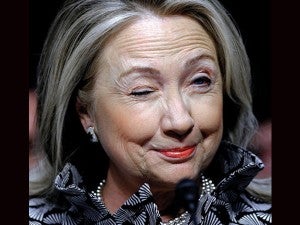 HILLARY CLINTON winks at a member of the US Senate’s foreign relations committee during a hearing on the UN Convention on the Law of the Sea. AP

WASHINGTON—US Secretary of State Hillary Rodham Clinton on Wednesday said that China’s claims in the West Philippine Sea (South China Sea) exceeded what was permitted by the UN Convention on the Law of the Sea (Unclos) as the Obama administration began a new push to join the 30-year-old treaty.

Two Democratic senators also criticized Beijing’s claims in the West Philippine Sea during a hearing of the Senate committee on foreign relations, where Clinton and top military leaders warned that Washington’s failure to ratify Unclos weakened its support for US allies in the disputed waterway and put the US military at increasing risk of confrontation with China.

“China and other countries are staking out illegal claims in the South China Sea and elsewhere,” said Democratic Senator John Kerry, chair of the foreign relations committee.

During the hearing, Democrat Senator Barbara Boxer produced a map showing that China’s claims extended far beyond its 320-kilometer (200-nautical-mile) exclusive economic zone provided for in Unclos and amounted to a “significant territorial grab that comes very close to the land borders of countries in the region.”

China, which is among the more than 160 nations that are party to the convention that was concluded in 1982 and has been in force since 1994, has made expansive claims in the West Philippine Sea based on ancient maps.

A map that China submitted to the United Nations in 2009 claims virtually the entire strategic waterway, but the Asian power has failed to clarify the exact extent of its claims that overlap those of Brunei, Malaysia, Taiwan, Vietnam and the Philippines, a US treaty ally.

Confrontations have erupted between China and some of these countries, particularly the Philippines and Vietnam. Even the US military has had repeated run-ins in the waterway with Chinese vessels and aircraft, including a midair collision in 2001 that killed a Chinese jet pilot and forced a US Navy reconnaissance plane to make an emergency landing on China’s Hainan Island.

To China’s chagrin, the Obama administration has asserted since 2010 that although the United States is not itself a claimant state in the strategic waterway, it has an interest in the peaceful resolution of the disputes and in the freedom of navigation in waters that carry a large chunk of global trade.

Even so, Clinton told the Senate committee that “as a nonparty, we cede the legal high ground to China. We put ourselves on the defensive. We are not as strong an advocate for our friends and allies in the region as I would like us to be, and I don’t think that’s any place for the world’s preeminent maritime power to find ourselves.”

During the hearing, top military and defense officials also said that without the treaty, the US military had been forced to base rights of navigation around the globe on customary international law, or long-standing practice, which was subject to differing interpretations.

General Martin Dempsey, chairman of the Joint Chiefs of Staff, said Washington’s ratification of Unclos would strengthen US security interests as it would provide clarity in definition of navigational rights and maritime zones—at a time of growing competition for resources.

Not at negotiating table

“And from that clarity comes stability. And as we now begin to rebalance our security interests into the Pacific, this becomes very important,” Dempsey said.

“If we do not ratify over time, what would happen is that we put ourselves at risk of confrontation with others who are interpreting customary international law to their own benefit,” he warned.

“If we are not a party to this treaty and can’t deal with it at the (negotiating) table, then we have to deal with it at sea with our naval power,” said Defense Secretary Leon Panetta. “And once that happens, you clearly increase the risk of confrontation.”

For his part, Kerry said “becoming a party to the treaty would give an immediate boost to US credibility as we push back against excessive maritime claims and illegal restrictions on our warships or commercial vessels.”

Panetta and Clinton told the Senate committee that Unclos would bring huge economic and military benefits to the country.

But the issue quickly ran into the same objections that have stymied the pact’s passage since the mid-1990s. Twice in the past decade, the treaty was approved at committee level but the pact never made it the floor for a vote by the full Senate.

Despite considerable bipartisan support and the backing of probusiness groups for Unclos, Kerry acknowledged the difficulty in moving the treaty, especially in an election year.

Several Republican lawmakers on Wednesday voiced opposition to the pact.

“My problem is with sovereignty,” Republican Senator Jim Risch said, flipping through the pages of the treaty. “There’s 288 pages here, and as you read it, there’s some good stuff in here. But if we have to give up one scintilla of sovereignty that this country has fought, has bled for . . . I can’t vote for it.”

Opponents of the treaty are also concerned it would cede US sovereignty to an international organization that would have the power to collect royalties on oil and mineral exploitation and use the funds to help poorer countries.

Proponents say the benefits far outweigh any drawbacks, citing support by groups as diverse as the Chamber of Commerce, Greenpeace, members of the oil and gas industry, top US military officials and recent Republican and Democratic administrations.

The accord creates 370-km (200-nautical-mile) exclusive economic zones that give coastal states rights of development and exploitation of natural resources but protect the ability of other countries to navigate, overfly and lay communications cables across the regions.

Because of its extensive coastal regions, the United States stands to benefit more than other countries by joining the treaty, proponents say. It would extend US sovereignty to vast areas of the ocean, while putting the military’s worldwide rights of navigation on firmer legal footing. Reports from AP and Reuters