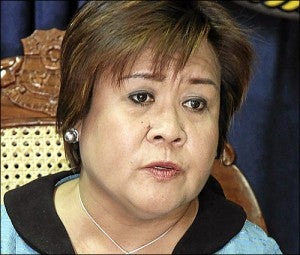 The Philippine government will be represented by Justice Secretary Leila de Lima in the universal periodic review before the United Nations Human Rights Council later this month in Geneva, Switzerland.

A total of 71 countries are set to scrutinize the Philippines’ human rights record when it faces the United Nations Human Rights Council later this month, according to militant and rights groups whose members are going to Geneva to monitor the proceedings.

The activists have prepared their own alternative report challenging the government’s position on the state of human rights in the country and will be distributing copies of their report to the UN member states scheduled to pose questions to the Philippine delegation, said Renato Reyes of the Bagong Alyansang Makabayan who is one of 14 activists scheduled to fly to Switzerland to monitor the review.

This is the second time the Philippines will undergo the universal periodic review before the intergovernmental body within the UN system responsible for strengthening the promotion and protection of human rights around the globe and for addressing situations of human rights violations and make recommendations on them. The government will be represented by Justice Secretary Leila de Lima in the proceedings.

Reyes said the Philippines failed in its commitment to eliminate extrajudicial killings and enforced disappearances, and that its official report on its human rights situation left much to be desired.

“The Philippine report is very underwhelming and provides no clear measure of progress in the Philippine human rights situation. On the contrary, the report glosses over the continuing human rights violations such as extrajudicial killings and enforced disappearances,” Reyes said in a statement.

He also said the Philippines continued to implement an anti-insurgency program that targeted activists.

Among the countries lined up to question the Philippines are China, the United States, the United Kingdom, the Holy See, France, Belgium and Japan. South Korea will be first in line, followed by the Russian Federation, Saudi Arabia and Singapore. Each country has one minute and 44 seconds to ask their question.

Malacañang on Tuesday maintained that there was an improvement in the human rights situation under President Benigno Aquino III compared to previous years, and said that there was a decline in the number of extrajudicial killings in the past three years.

Deputy presidential spokesperson Abigail Valte said these “developments” would be among those to be presented by the Philippine delegation to the UN on May 29.

Valte attributed the decline to the work of various agencies, citing as an example the human rights handbook put out by the Armed Forces of the Philippines which was being used to train soldiers. The military also continues to work with human rights advocacy groups, she said.

Read Next
Foreigner-bashing rises amid China’s domestic woes
EDITORS' PICK
DOH: Too early to say COVID-19 cases are declining
Duterte praises military but slams police for poor discipline, corruption
Acer starts the year off strong with the Aspire Vero National Geographic Edition
The best of bayside and city living at SMDC’s Sail Residences
COVID-19 cases surging in all regions and provinces, says DOH
Over 3 Million worth of prizes to be won at Smart Padala’s SENDali Manalo Promo!
MOST READ
Marcos Jr. visits Cebu, stands as ‘ninong’ to mayor’s son
Duterte praises military but slams police for poor discipline, corruption
Djokovic has to comply with rules to go to Spain, PM says
Comelec junks petition to scrap Bongbong Marcos COC
Don't miss out on the latest news and information.