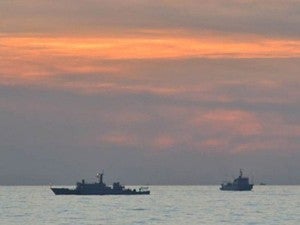 “(We) will remain on high alert over the island to prevent any provocative behavior,” China’s foreign ministry spokesperson Hong Lei said in a news item posted Friday on the Chinese government’s web portal.

Hong also said the “Philippine side” should stop such “irresponsible remarks and inciting radical behaviors.”

Faeldon earlier planned to hold a “patriotic voyage” to the disputed shoal but was dissuaded from doing so by President Aquino at the last minute on Friday.

Presidential deputy spokesperson Abigail Valte said the President asked Faeldon to reconsider his plan because “it might be construed in a negative way.”

The Philippine government has a policy of deescalation in the wake of the standoff with China over the shoal.

Hong reiterated that Huangyan Island—the name by which China refers to the disputed shoal—is “part of China’s territory.”

He also urged the Philippines to “come back to the right track of a diplomatic solution” to the ongoing dispute and “send clear and consistent messages” on the issue.

Sought for comment, Foreign Secretary Albert del Rosario said: “As we had said, we are endeavoring to utilize diplomatic consultations in the hope that we can diffuse the current circumstance in Bajo de Masinloc.”

“We believe that a more durable solution, however, would need to be a validation of our respective claims as provided for by the dispute settlement mechanisms under the United Nations Convention on the Law of the Sea,” Del Rosario said in a text message to the Inquirer.

On the other hand, Faeldon’s spokesperson, Kit Guerrero, said that China appeared to be “overreacting.”

“The voyage never took place because the President asked Nick not to push through with it,” Guerrero said, adding that Faeldon’s intention “was never to provoke or agitate, but to support the country’s position in a peaceful and unarmed way.”

“Even if it pushed through, there was no plan to raise our flag, but only to show our civilian presence there which is our right as citizens within our Philippine territory,” he said.

Meanwhile, the Filipino community in Hawaii held a community forum at the Philippine Consulate last week to discuss current Philippine maritime issues and concerns, more specifically those related to the dispute over Bajo de Masinloc and the waters within its vicinity.

“The consulate made it clear that the purpose of the forum was not to incite or ignite anti-China sentiments but rather to provide a more academic perspective of the current issues between the Philippines and China,” the Department of Foreign Affairs said in a statement.

The consulate also stressed that the forum was a private initiative of the community and not of the Philippine government, adding that many of those who attended expressed much appreciation for the initiative.

The participants included members of the Hawaii Filipino Lawyers Association, Fil-Am Youth Forum, the academe and the media.