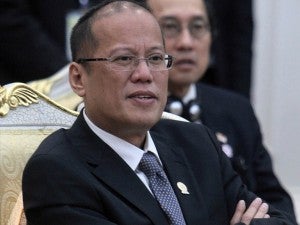 MANILA, Philippines – President Benigno Aquino III is willing to share with other countries in the region the benefits of the natural gas deposits in the disputed territories in the West Philippine Sea. But he said he will not be a  party to the ceding of portions of the Philippine archipelago to a foreign power like China.

Speaking before a general assembly of alumni of US universities late Wednesday, Aquino said the Philippine government continues to talk with the Chinese for a mutually beneficial solution to their standoff over the Panatag (Scarborough) Shoal as well as other disputed territories in the area.

“I am not empowered to give up any of our territory,” the President said in answer to a suggestion that “a win-win solution” might be for the two countries to split the $35 trillion worth of natural gas that another disputed territory, the Recto Bank, is believed to hold.

The Recto Bank (international name: Reed Bank), which lies within the Philippines’ 200 nautical-mile (370 kilometers) economic zone, is located abut 150 km east of the Spratly chain of  islets, which is claimed in whole or in part by Brunei, Malaysia,

Taiwan and Vietnam, as well as the Philippines and China.

The Recto Bank, which is said to have oil and gas deposits that reach deep into the Cuyo Islands in Palawan, has been the subject of numerous exploration campaigns by the Philippines in the past.

The Philippines last year filed a diplomatic protest against China after two Chinese ships reportedly harassed a vessel that had been contracted by the government to undertake oil exploration activities in the bank.

Aquino acknowledged that the huge benefits from the resources in the disputed territories could free the region from dependence on fossil fuel from Middle Eastern and North African countries.

“If we are able to exploit these resources, that redounds to benefits for the entire region,” he said.

He said the parties to the dispute “should work towards easing the problems and the concerns of our respective peoples in the here and now and not in some future date where, you know, it is not a fair solution.”

“If it’s clear that we have a 200-mile economic zone, exclusive economic zone, designated by the United Nations Convention of the Law of the Seas, and both of us are parties to it, is it too much to ask that our rights are respected by our neighbors in the same token that we respect their rights?” he said.

The President said the Philippines doesn’t have to be “the sole winner of exploitation of resources” in the disputed areas. He said the country has always been a good neighbor to other countries in the Asia Pacific.

However, it has to draw the line when it should look after its rightful interests, he said.

“Recto Bank is 80 miles from us. There are areas that are even closer… So if we keep on subtracting about 30 percent—and not to be flippant about it—if you don’t draw the line somewhere, will we be having claims against us on the Pasig River or other rivers?” he added.

He stressed that the Philippines was resolved on a peaceful and diplomatic solution to the disputes with China, noting that it cannot afford to engage Beijing militarily.

“So we are exploring ways and means to resolve the conflict. We keep on reemphasizing that we are not for conflict. We do not want to present a threat to them in any shape, manner or form, or whatsoever in terms of military action,” he said.

“If it were just a boxing match, they’re 1.3 billion and we’re 93 million. We will not prevail. That is not the route and our Constitution actually prohibits it,” he said.

Parañaque Rep. Roilo Golez said there is an upside to the tension between the Philippines and China over the Panatag Shoal dispute.

He said the Philippines’ refusal to bow down to China has united many Filipinos against a common enemy and earned the country respect from other groups and nations.

“This extended standoff, with the Philippines not buckling down against the world’s second most powerful country, is gaining for us international respect and moral support,” Golez said in a statement.

“It is a unifying and rallying force. Even Filipino groups outside the country have mobilized themselves in support of our cause,” he said.

It also shows the world that the Philippines has a strong and steadfast foreign policy that does not crumble under economic pressure and veiled military threats, Golez said. With Leila Salaverria