Number of global tourists to top 1 billion this year 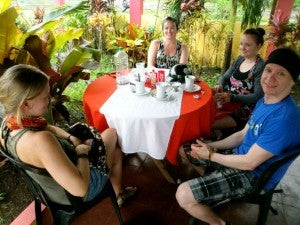 A group of Polish backpackers dine at a local café in Camiguin Island in southern Philippines. The Philippine government is aiming to boost its foreign tourist arrivals by launching the “It’s More Fun In The Philippines” campaign. Photo by Don Lejano/INQUIRER.net

MEXICO CITY—The number of people vacationing abroad this year is expected to top a billion for the first time, the head of the global tourism authority said.

The forecast is higher than expected and presents an opportunity for governments to create jobs in difficult economic times, added Taleb Rifai, secretary general of the World Tourism Organization.

“We will see more than a billion tourists this year, that’s virtually a seventh of the world population,” Rifai told a two-day meeting in Mexico of tourism ministers from the Group of 20 major economies. “It’s a first in history.”

Statistics for the first quarter of 2012 showed a 5.8 percent increase in the flow of tourists compared to the same period in 2011, Rifai said late Tuesday. That’s higher than a previously anticipated increase of about 3 to 4 percent over the course of the entire year, he added.

Rafai urged meeting participants to come up with ways to use tourism to create much-needed employment in “a world in need of growth and economic stimulation.”

Read Next
Aquino, Obama set to meet in June
EDITORS' PICK
‘Justice will be done,’ Duterte assures as he vowed probe on Jolo incident to bare ‘truth’
EuroMillions Superdraw: A lottery draw unlike any other is coming to the Philippines
Current dominant strain of COVID-19 more infectious than original—study
DOLE: Return of OFWs’ remains from Saudi to be ‘delayed,’ deadline moved to ‘early next week’
Smart releases Hyun Bin’s second TVC
Water remains our saving grace right now
MOST READ
Locsin warns of ‘severest response’ if China’s army drills in SCS ‘spill over’ to PH domain
Duterte tells military: No other president looked at you the way I did
BREAKING: Duterte signs anti-terror bill into law
Go apologizes for 5-on-5 game; PBA summons Japeth, ROS rookie
Don't miss out on the latest news and information.