US sub visit has nothing to do with China–DND 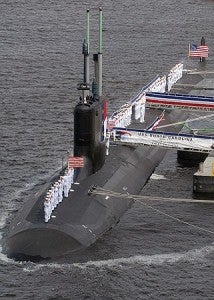 MANILA, Philippines – The arrival of a US submarine in Subic Bay in Zambales is a “regular port call” and not related to a territorial dispute between the Philippines and China, the Department of National Defense said Wednesday.

Paul Galvez, a spokesperson for the defense department, said the USS North Carolina’s port call had been scheduled since April 3, a week before the dispute over the Panatag (Scarborough) Shoal erupted.

“These are totally different issues or different activities,” Galvez said in an interview.

The visit of the USS North Carolina was just like the regular port calls by other vessels from other countries, Galvez said. “That’s normal,” he added.

The North Carolina docked at Subic on Sunday. It will leave on Friday after restocking and rest and recreation by its crew.

Its arrival in Subic Bay, announced in a press statement by the United States Pacific Command and posted on the US Navy website, was unwelcome to the militant Bagong Alyansang Makabayan (Bayan)

In a statement issued Wednesday, Bayan said “it’s as if the US military base is back in Subic.”

“Virtual basing and hosting of US warships are being justified by the Philippines-US Visiting Forces Agreement (VFA) and the Mutual Logistics Support Agreement,” Bayan secretary general Renato Reyes said. “Philippine ports like Subic are again providing logistics support for US ships. We might see more of these port calls now that the US is rebalancing toward Asia.”

He said the arrival of the North Carolina may be in violation of the Philippine constitutional ban on nuclear weapons. “The problem is that under the VFA, the US neither confirms nor denies that its ships carry nuclear weapons,” Reyes said. “However, the presumption is that they do, especially the more advanced ships.”

Reyes said the arrival of the North Carolina “may have negative repercussions” on the search for a peaceful solution to the Panatag dispute between China and the Philippines.

“The US warships’ port calls are part of a greater strategy to project military power in the region,” Reyes said. “It is directed at all countries, but most especially China, in order to keep China subservient to US dictates.”