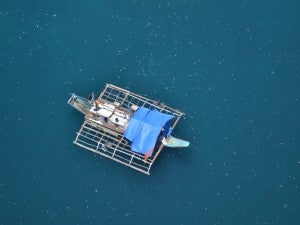 A Chinese fishing vessel is spotted in the disputed Scarborough Shoal in the West Philippine Sea. AFP Nolcom Photo

MANILA, Philippines—The Bureau of Fisheries and Aquatic Resources on Wednesday said Filipino fishermen have been directed to stop fishing at Panatag Shoal (Scarborough Shoal) for two months starting May 16.

BFAR Director Asis Perez said the Philippines’ prohibition on fishing in the area which coincides with a similar ban from China, was intended to allow the agency’s experts to study Panatag Shoal to determine ways to protect the area.

“We have a continuing study there while we have a ban,” Perez said over the phone. “We have a directive to the fisheries management resource division to conduct further study on what needs to be done in the area.”

But Del Rosario also said President Benigno Aquino wanted the country to impose its own fishing ban to replenish the fish stock in the area.

Perez on Wednesday said the ban would be imposed by the Philippines for two months, but this may be extended until further notice depending on the needs of the area. “It would depend on what the study will find,” he said.

China’s fishing ban at the shoal is imposed annually and is supposed to conserve marine resources in the area.

The Philippines is seeking a diplomatic solution with China over the territorial dispute, which began when Philippine authorities caught Chinese fishermen with supposedly illegally harvested turtles and coral already loaded onto their vessel.