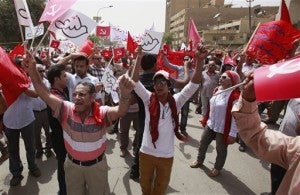 Supporters of the Iraqi Communist Party take part in the May Day march, in Baghdad, Iraq, on May 1, 2012. The Philippines has lifted an eight-year ban on its nationals working in Iraq, but only for the autonomous Kurdistan region. AP PHOTO/HADI MIZBAN

MANILA, Philippines—The Philippines has lifted an eight-year ban on its nationals working in Iraq, but only for the Middle Eastern country’s autonomous Kurdistan region, the foreign ministry said Sunday.

In 2004 then-president Gloria Arroyo withdraw a contingent of Filipino police and soldiers assigned to the US-led coalition in Iraq after a Filipino truck driver was kidnapped and threatened with beheading.

The driver was released unharmed and Arroyo banned all Filipinos from working in the country.

Now Filipino overseas workers, a major engine of the economy, will be allowed to return to Kurdistan but not the rest of Iraq, Department of Foreign Affairs spokesman Raul Hernandez said in a statement.

Despite the ban, officials estimated that as many as 10,000 Filipinos continued to work in Iraq.

Nine million Filipinos, 10 percent of the population, work overseas largely in low-skilled jobs such as maids and sailors, but also as nurses, engineers and IT specialists.

They sent $18.17 billion back to the Philippines last year, equivalent to 10 percent of the country’s GDP, and are hailed as modern-day heroes by many of their countrymen for helping keep the economy afloat.