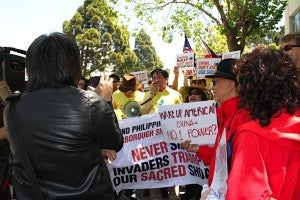 ‘United we stand. One voice against an intruder, Back off, China.’ ESTHER M. CHAVEZ/INQUIRER.net

This was the scene in front of the consulate of the Peoples’ Republic of China at noon Friday (Saturday in Manila) and, if things went as planned, in front of six other Chinese consulates or embassies in the US and two in Canada as well as the Chinese embassy in Makati. Philippines. In an interview with, Rodel Rodis, president of the US Pinoys for Good Government, he gave a short backgrounder on the Scarborough Shoals issue, stating that what the Philippines wants is that the territorial conflict be resolved by an international tribunal and not bilaterally between the economic and military superpower that China is and a small, developing country like the Philippines.

Among the goals of Friday’s rally, according to Rodis, was to rouse American public opinion against China’s bullying tactics, and get the Obama administration to “come out forcefully in support of the Philippines.” The rally also sought to inform the world about the ongoing tensions between the Philippines and China, present the Philippines’ position on the matter, and to educate and unify the Filipino community and get it to rally around the issue.

Rodis pointed out that there are some12-million Filipinos spread all over the world that can elicit the sympathy of and solicit help from each of their adopted countries. After all, this may be a Philippine issue at the moment but this former sleeping giant has awakened to its size and power and, in its April 25 editorial, the Global Times, published by China’s official People’s Daily, and quoted in a Bay Area media advisory, this recently awakened giant issued a metaphorical warning addressed, if taken in its broadest interpretation, to all the countries of the world, saying, “If the water overwhelms China’s knees, other countries will find their necks in the water.”

That same media advisory referred to a commentary in The People’s Liberation Army Daily warning that “… anyone who tries in vain to seize sovereignty of Huangyan Island will be rebuffed by the Chinese government, Chinese people, and even more the Chinese military.”

And as if to make sure everyone understood, the commentary further stated, that “…. Beijing will not flinch from a military response if the conflict escalates. “

The Asian giant is rattling its not so insignificant saber at the Philippines. What little country will it bully next?

That is the lyrical translation of a phrase in the English version of the Philippine National Anthem, the version those of us over 40 years of age first learned and sang. That phrase went, 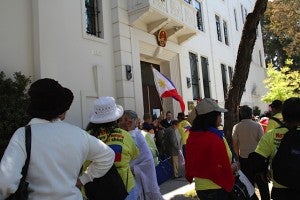 A protester waves the Philippine flag in front of China consulate in San Francisco as 150 Filipino-Americans march to protest Beijing’s alleged aggression in the West Philippine Sea. ESTHER M. CHAVEZ/INQUIRER.net

“Ne’er shall invaders, trample thy sacred shores.” The more literal translation would be, “To the plunderer you shall not succumb.”

The “invaders” and the “plunderers” have come at various times in the country’s history—the British, the Spanish, the Americans, the Japanese. Now, the Filipinos are potentially facing yet another. Each time, the Filipino has risen to fight for his country, outmanned and outgunned but ever willing to shed blood to protect his motherland. And through it all, the Filipinos, with their indomitable and resilient spirit, may have been vanquished but have remained unbowed. We have survived as an independent nation, unshackled to any world power and beholden to none. If this ongoing dispute escalates, it will clearly be a David versus Goliath story. Let us all hope it doesn’t come to that.