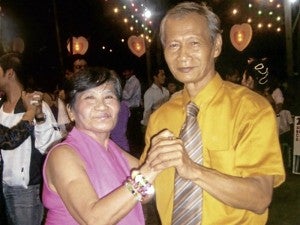 RETIRED OFWs Joven and Violeta Alavazo enjoy dancing at a fiesta in their hometown of Anao, Tarlac.

After almost 20 years working overseas, Joven and Violeta Alavazo came home to retire. With their hard-earned savings, they settled in a modest, middle-class subdivision in Sucat, Parañaque City, looking forward to days of travel and leisure, and easy nights of dancing and singing—things they so missed abroad.

There were many welcome-home parties. The couple  felt great pride in having accomplished their difficult mission early: They had sent five children through college and were able to retire, when both were 52, from big companies in the United Kingdom with comfortable lifetime pensions.

But they should have sensed trouble brewing  with the endless stream of new kumadres and kumpadres going in and out of their home, says Violeta, who retired in 1994 as assistant building manager of giant British Telecom’s postal division. Some of their neighbors apparently assumed they could just move in; some borrowed money and never came back.

Then there were the early morning banging and clanging of a neighbor who simply appropriated the street close to their gate for what appeared to be a car repainting shop.  Joven, a quiet and reserved gentleman who drove the Central Line for what Londoners fondly call the Tube, says he fears an asthma attack coming on every time the smell of acidic spray paint wafted into their living room.

The elderly couple also had an anxiety attack when another neighbor, a gun-toting policeman, held a noisy New Year drinking session till the wee hours of the morning out on the street in front of their house. 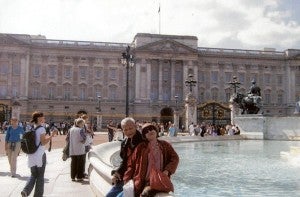 THE ALAVAZOS pose in front of Buckingham Palace, London

Neighbors and relatives may have underestimated the couple’s courage and tough determination to overcome adversities—the very qualities that set them on a journey from their impoverished home in Moncada, Tarlac, to seek new fortunes in the United Kingdom in 1975.

Hardships  are not new to Joven and Violeta, both born in 1942, during World War II,  in poor farming communities. Joven  polished floors for a distant relative to earn a few centavos to go to school. He graduated class valedictorian in his elementary school in Anao and earned medals in high school in Moncada. He dreamt  of a career in technology or engineering but his father did not have the money to send him to a university. The only thing his father could afford was a secretarial and stenography course, then the only course offered at nearby Central Institute of Technology. He caught the eye of Violeta, another secretarial student, when he graduated at the top of their class in 1964.

Violeta eventually made her way to Manila where she got a clerical job at the Office of the Provost Marshall at what was then Nichols Air Base (now Villamor Air Base). When the two married in 1967, they settled in Moncada.  Joven quit his job as a bus conductor and found a municipal job branding large cattle and collecting taxes and, later, as a police investigator in Anao. 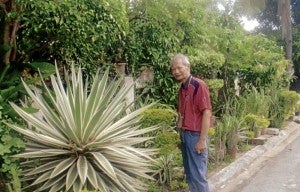 Joven tends a garden in his home in Parañaque

Good referral letters would help them get jobs and promotions. Joven once mustered the confidence to apply for a loan at a rural bank, hoping to improve their bahay kubo (a traditional thatched hut).  The bank manager remembered Violeta, who had worked for him years earlier in a store. He had good memories of her honesty and dependable service and immediately offered both Joven and Violeta jobs.

Joven had already worked himself up to chief of the loan and discounts department of the Tarlac Savings and Loan Association when he received a postcard from England. It was from a teacher who landed a job there as a domestic through a recruiter.  Joven knew his P150 monthly paycheck was simply not enough to send his brood of five to college. He bit his lip and went to see the recruiter. They sold a carabao and some acacia trees to a lumber yard to raise P3,000 each as placement fees for whatever job was available. Violeta’s sister, Mercedes, agreed to care for the kids.

They started as domestic helpers in what looked to them like a countryside castle in Kent. They eventually transferred to service jobs in London hospitals until finally landing regular and relatively well-paying jobs in government companies. Although there was callousness and discrimination around, they also met people who showed them kindness and understanding. 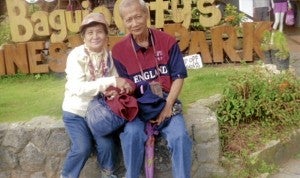 The couple cannot forget the kindness of their first employer—the Pierce family of Sevenoaks—who soon enough discovered that Joven had never in his life handled a motorized lawn mower and Violeta could not cook continental food. The English family encouraged them to learn and helped them hurdle the language barrier by taking them to theater shows. Less than a year later, when the Alavazos admitted they were not really happy in their domestic jobs, the family wished them good luck and even drove them to the city.

The couple found service jobs at London hospitals. When they got their citizenship papers after 11 years, they qualified for government jobs.

At the London Underground, Joven started as a train guard. He is particularly proud to have eventually passed the test that allowed him to operate a train. “The safety standards and technical skill requirements are very high,” recalls Joven. “There were four tests, all aimed at testing speed in decision making.”

Violeta saw a job opening in a newspaper for a postal assistant at British Telecom and applied. She also passed her qualifying tests.

By this time, the Alavazos were able to go home regularly for vacations. The kids were finishing college—the eldest son, Angelito, in aeronautical engineering, second son Arnold in business administration; and daughters Elvira, Mary Joey and Marivic in nursing, radiologic technology, and medical technology, respectively.

Joven and Violeta  took advantage in 1994 of an early severance scheme. Substantial lump sums and lifetime pensions were the prizes for their years of toil. “Parang natapos na boxing. Nagbunga din ang paghihirap namin (The fight was over. At last, the fruit of our struggle),” Joven says with a smile.

The couple toured Europe. They visited Magellan’s hometown in Portugal, danced the flamenco in Spain, climbed the Eiffel Tower in Paris and bathed in the holy waters of Lourdes in the south of France. They met up with their children and feasted in Hong Kong. (Four of the children are now overseas workers themselves—in Qatar, Kuwait and Singapore.) They looked forward to coming home finally.

So when their image of retirement bliss began to shatter, Violeta gathered her old verve and told her overstaying kumadres and kumpadres to go home. The couple also got a lawyer to deal with unpaid loans.

She eventually condoned some of the unpaid debts, but told her debtors frankly: “Let’s stop calling each other ninang and ninong (ritual godparents).”

Standing up to bullies

She stalked the barangay court and succeeded in putting a stop to the car spraying in front of their house. “It was hazardous to everyone’s health,” she exclaims.

“Excuse me. It’s almost dawn … we can’t sleep,” she had told the policeman-neighbor, in a mixture of Filipino and her strange-sounding British slang.

The response, according to the couple, came in the form of “menacing stares” and catcalls. Her neighbor’s wife had earlier taunted: “Hoy, hindi mo ba alam pulis ang asawa ko (Don’t you know that my husband is a policeman?)”

Violeta went straight to Camp Crame to complain. (While she was there, she discovered that a subdivision official who always presented himself as a “colonel” was not on the military roster. She duly informed the homeowners association.)

Although the couple was eventually persuaded to withdraw their case against their policeman-neighbor (which is why the Alavazos no longer want to mention his name publicly), their complaint eventually reached then Philippine National Police (PNP) Director General Arturo Lomibao.

The PNP chief ruled that, even with the Alavazos’ affidavit of desistance, the policeman should still face administrative charges for “conduct unbecoming of a police officer” and unjust vexation. Lomibao suspended the policeman for two months without pay and gave him a stern warning to stop disgracing the PNP uniform by harassing his OFW-retiree neighbors—“now and forever, or else … ”

Those who received a piece of Violeta’s mind probably thought: “Porke naka-abroad lang, masahol pa kay Miriam (Just because you have been abroad, you act worse than Miriam—the fiery and sharp-tongued Senator Santiago.)

But asks Joven: “Is it a wish only of those who have lived abroad to have streets that are clean and pollution-free?  To have security and protection from the authorities?  To have responsive and impartial courts and to be free from age discrimination? Is it too much to expect neighbors to limit their loud parties and street drinking sprees to reasonable hours?”

Adds Joven, “We are older citizens, we need to be able to sleep soundly at night.”

Violeta also glares at people who try to put them down with remarks like “Ay, nagbunot lang ’yan sa amin noong araw (those people were  just cleaning our floors before).”

Although the government calls overseas Filipino workers heroes, “some people do not respect the dignity of labor or recognize the achievements of OFWs,” laments Violeta.

But, despite the aggravations,  Joven and Violeta do not regret returning home to retire. They love the year-round warm weather and the abundance of fresh food. They like the white-sand beaches. They shuttle between Manila’s modern malls and provincial leisure spots.

After over a decade of fighting and wrangling with their neighbors, the couple says their community has quieted down. “We are enjoying our retirement—attending fiesta balikbayan nights and ballroom dancing, swimming parties (in popular resorts), family and alumni reunions, malling with grandchildren, eating out whenever we want,” says Violeta.

The Alavazos are simple and honest folk.  Surely, after all those years of struggle, they deserve to dance and celebrate to their hearts’ content.

This story, agrees Violeta, is not just about how to persevere and succeed abroad. It is also about how to work hard and stand up to make retirement truly more fun in the Philippines.