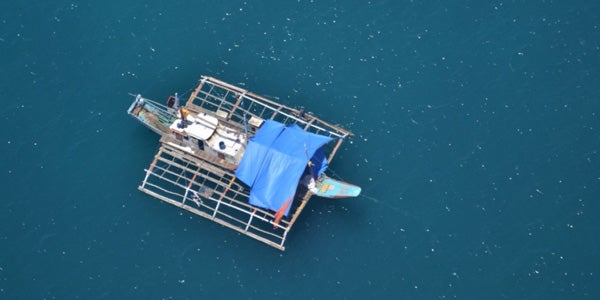 A Chinese fishing vessel is spotted in the disputed Scarborough Shoal in the West Philippine Sea. AFP Nolcom Photo

While Filipino fishermen still ply their trade at Scarborough Shoal about 230 kilometers (140 miles) from the Philippine coastal town of Masinloc, they say rifle-brandishing Chinese personnel on rubber boats are intimidating them.

Shortly after returning from two weeks at the shoal, crewmen from a 15-meter (50-foot)-long outrigger, said the Chinese shadowed them whenever they sought to fish inside the shoal.

“They sent their rubber boats to follow us and circle our vessel. They didn’t make threats but it was dangerous because sometimes we almost collided,” boat mechanic Glenn Valle, 40, told Agence France-Presse.

“We were afraid because all the boats were moving and they were sticking close to us, close enough to touch our outriggers.”

Fishing boat captain Zaldy Gordones, 34, said each Chinese rubber vessel carried about eight men in grey camouflage uniforms with rifles and long-lensed cameras, which they used to photograph the Filipinos.

The rubber boats were deployed by Chinese surveillance ships that have been posted near the mouth of Scarborough for more than a month to assert China’s claim over the rocky outcroppings, according to the Filipinos.

The Philippines says the shoal is part of its territory because it falls within its exclusive economic zone.

But China claims as its historical territory virtually all of the South China Sea, which is believed to sit atop huge oil and gas reserves as well as being home to important fishing grounds.

The nearest major Chinese landmass to Scarborough Shoal is 1,200 kilometers northwest of the shoal, according to Filipino navy maps, but China insists it discovered the area first and thus has legal claim to it.

The rival claims flared into a major diplomatic dispute on April 8 when Philippine authorities accused Chinese fishermen of taking endangered species, such as clams and corals, from the area.

Philippine efforts to arrest the fishermen were thwarted when two Chinese surveillance vessels arrived at the scene.

Since then, non-military ships from both countries have been deployed there in a war of nerves between the two governments that has severely tested their diplomatic relations.

Fishermen from Masinloc have been making the journey to the shoal for two decades, a trip that can take eight to 14 hours depending on sailing conditions.

The waters around the shoal are renowned for the rich bounties of fish, which congregate around the rocky outcroppings.

While coastal areas have been largely depleted, the Filipinos know they can return from a trip to the shoal with boats packed with anchovies, tuna and scad.

Despite the rival claims, boats from the Philippines, China, Vietnam, Taiwan and other countries all regularly visited the shoal, which is also a refuge during bad weather, according to Masinloc residents.

The fishermen used hand signals to communicate, said boat mechanic Valle, recalling how they would ask Chinese crew for help.

“If we wanted to ask for water, we just held up a container and made a drinking motion and they would give us water,” Valle said, adding the Vietnamese were even more generous.

“They gave us rice and noodles even if we didn’t give them anything.”

Masinloc’s local fisheries officer, Jerry Escape, said stories were common of fishermen from different countries bartering food, water and cigarettes with each other.

“There has been no ill-treatment of any fishermen reported,” he said.

But Chinese fishermen also had a reputation for taking marine species that were protected under Philippine law such as sea turtles, corals and giant clams, according to Masinloc people.

“For our fishermen, there are things that are prohibited but for the Chinese, nothing is prohibited. They take what they want,” said Nestor Daet, 55, local head of a volunteer environment protection group, Sea Guardians.

Masinloc fishermen were warned to avoid the shoal to keep from getting caught in any possible crossfire immediately after the stand-off began.

But there was no ban and Masinloc coastguard deputy officer Norman Banug said he now even encouraged them to go back out there.

“If (the Chinese) see no Filipinos fishing there, they will think they can take over that area,” he said.

Read Next
Loida Lewis to China: ‘You’re shameless’
EDITORS' PICK
Omicron variant detected in more countries as scientists race to find answers
Gov’t plans to open COVID-19 vaccination for 5- to 11-yr-olds by January 2022
A delightful blessing!
Villar Group gears up for AllValue Shopping Party on Dec. 3; around P 1-million promos and discounts up for grabs
Legarda: Ending Violence Against Women, a cause for all
Gov’t eyeing COVID-19 vaccine booster for essential workers, indigents by Dec. 10
MOST READ
Omicron poses ‘very high’ global risk, countries must prepare–WHO
Quiboloy warns of ‘much worse than Omicron virus’ if his ‘persecution’ is not stopped
Bongbong Marcos’ conviction in tax case not a crime involving moral turpitude — lawyer
Marcoleta defends pol ads on ABS-CBN
Don't miss out on the latest news and information.