MANILA, Philippines—The Panamanian national accused of raping a 19-year-old Filipina left the country Friday night, according to an airport official.

According to the airport official, who refused to be named for lack of authority to speak to the media on the issue, Shcks was accompanied by the Panamanian ambassador to the Philippines Roberto Carlos Moreno on the trip.

Airport personnel said the two checked in quietly and did not avail of the customary diplomatic assistance given to dignitaries at the airport.

Shcks’ alleged victim on Thursday went to the Department of Justice to seek help.

However, Justice Secretary Leila De Lima said that Shcks, a technical officer of the Panama Maritime Authority and a diplomatic passport holder, was covered by the immunity granted to foreign diplomats as stated in the 1961 Vienna Convention on Diplomatic Relations. 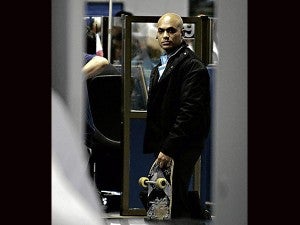 She said Shcks may leave the Philippines anytime, and there is no legal basis to hold him here.

“We really cannot do anything because of that diplomatic immunity. That’s an international agreement,” she said.

Shcks was accused of raping the victim in his rented condominium unit in Makati City on April 23, a few days after he purportedly befriended her.

De Lima noted that the Department of Foreign Affairs had already issued a certification that Shcks had diplomatic immunity.

“Under the existing jurisprudence, DFA is the primary agency with competence and authority to make such [a] declaration and certification. The only orders we refuse to obey are those made with grave error,” she added.

De Lima said that the only way the victim may pursue her criminal complaint against Shcks was for the Panamanian government to waive his immunity through the DFA.