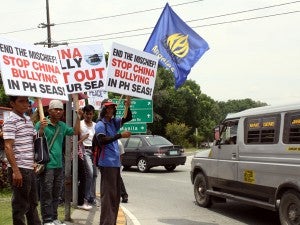 Kapampangans take to the streets on Friday, May 11, 2012, to express their sentiments against China's claim on Scarborough Shoal off the coast of Masinloc town in Zambales. PHOTO BY TONETTE T. OREJAS/INQUIRER CENTRAL LUZON

CITY OF SAN FERNANDO, Pampanga—On behalf of her father, who has been fishing at Scarborough Shoal west of their Masinloc home in Zambales, Ruelyn Gubalane on Friday joined some 200 activists protesting China’s “bullying” of the Philippines amid a territorial dispute.

The multi-sectoral group Stand Up for Scarborough Shoal (Stand Up!) organized the protest in front of the Paskuhan Village here. At the rotunda across two malls and leading to the North Luzon Expressway, the protesters planted 50 placards condemning China.

Some read: “China, Bully. Get out of our Sea,” “China: Afraid of Itlos [International tribunal for the Law of the Sea],” “Make peace, not war;” and “Huangyan? Huwag yan (Not that)! Scarborough is our Shoal.”

Gubalani’s father, Ruel, 44, was originally from Leyte but he settled in Barangay (village) Inhobol in Masinloc where many fishermen regularly catch fish during off-rainy season. He works as the captain of a vessel that fishes for tuna at the shoal, which locals call Bajo de Masinloc.

The shoal is within the 320-kilometers exclusive Philippine economic zone. Facing Zambales, it is 220 kilometers from the province, 320 km from Puerto Princesa City and 350 km from Manila.

“Let it be clear to all that the Filipino people have no quarrel with their Chinese brothers and sisters, with whom they share centuries of good relations. Many Filipinos of Chinese descent have helped build, and continue to build, our nation,” Stand Up! said in a manifesto.

“Our protest is directed at the overbearing actions and stance of the government in Beijing, which behaves like an arrogant overlord, even in the homes of its neighbors.”

Kelvin Vistan, spokesman of the Kilusan para sa Pambansang Demokrasya in Pampanga, blamed the United States for “provoking the conflict.”

“This is part of the current strategy of the US to control the Asia-Pacific and stop the growth of China,” Vistan told reporters.

Jerome Gatchalian said he and his fraternity brothers in Phi Beta Rho Banahaw chapter joined the protest because “we are Filipinos.”

Former Pampanga Governor Eddie Panlilio said, “This is a time of reasons and laws but China refused to go to the [International Tribunal for the Law of the Sea].”