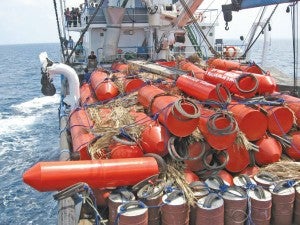 FENCING OFF FISHING GROUNDS A government vessel deploys “payaos” in this photo from the Bureau of Fisheries and Aquatic Resources. The government will fence off Philippine fishing grounds with payaos. PHOTO COURTESY OF BFAR PIO

The Philippines may not be able to send more vessels to Scarborough Shoal, but it can  fence off its fishing grounds in waters near the disputed area.

Agriculture officials Thursday said the Philippines would expand the number of fish aggregating devices called payao in the waters off the coast of western Luzon, including Zambales province, where China and the Philippines are disputing possession of Scarborough Shoal.

Bureau of Fisheries and Aquatic Resources (BFAR) Director Asis Perez said the Philippine government recently ordered new payaos to be placed in the open sea. As such, fishermen would not have to venture out to the ocean to fish and risk their lives.

A payao is made of hooks attached to a sturdy rope that can be lowered as deep as 1,500 meters under the sea. A buoy is attached to the top end of the line to mark its location for fishermen. Most payaos in the Philippines are anchored to the sea floor.

Perez said the plan was to scatter 160 shallow-water and deep-sea payaos from La Union to Zambales. While there are fishermen who harvest fish in the waters around Scarborough Shoal (also called Panatag Shoal in the Philippines), Perez said the government would not put a payao there because it is too far from the coast.

He said the area is a seasonal fishing ground, where waves become too rough for small boats by July.

Agriculture Undersecretary Joel Rudinas said payaos would help increase the catch and income of marginal Filipino fishermen, who use handheld lines and nets in catching certain fish, such as tuna.

Perez said Filipino fishermen were not banned from the waters near Scarborough Shoal.

Perez explained that the fishermen were advised not to go to the disputed area when tensions between the China and the Philippines broke out in April. “We didn’t know what could happen,” he said.

Since then, Filipino fishermen have been returning to the area, Perez said. “There are four fishing boats [there] now,” he added.

Shoals, reefs and rock outcroppings are home to marine plants and animals, which provide food for fish. Thus, Scarborough Shoal teem with fish and Filipino fishermen frequent it despite the distance—220 kilometers from the nearest landmass, Rudinas said.

Because the West Philippine Sea is rich in marine life, it is not unusual to see fishermen from China and Vietnam poaching there in the past, he said.

“But they were not as belligerent as these ones,” Rudinas said, referring to the Chinese vessels facing off with Philippine vessels at Scarborough Shoal.

Rudinas said Chinese fishers use longline fishing, a commercial technique that employs baited hooks attached to a line that could stretch out for kilometers over the water. Longlines can be floated near the surface using buoys or set on the sea floor.

The Scarborough dispute began on April 8 with the seizure by Philippine authorities of Chinese ships carrying illegally harvested turtles, baby sharks, giant clams and corals. A Philippine Navy warship was sent to the area to tow the poachers’ vessels to shore but they were blocked by two Chinese ships.

The two countries have refused to withdraw their ships from the area. There are now 33 Chinese vessels at the shoal facing off with two Philippine ships.