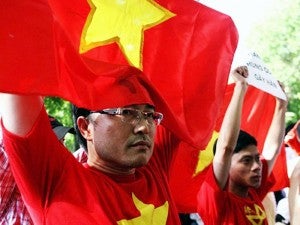 Protesters hold up Vietnamese flags and anti-China banners during a protest against the alleged invasion of Vietnamese territory by Chinese ships in disputed waters, in Hanoi on Sunday. AFP

HANOI—Vietnam is determined to protect the “incontestable” sovereignty of two South China Sea archipelagos, the prime minister said in a report Thursday, intensifying a war of words with China.

Tensions between Beijing and Hanoi are at their highest in years owing to long-standing territorial disputes over the potentially oil-rich Paracel and Spratly archipelagos.

The situation escalated in late May after Vietnam accused China of violating its exclusive economic zone stretching to 200 nautical miles.

The public comments by Prime Minister Nguyen Tan Dung, communist Vietnam’s most powerful figure, are his first on the incident and indicate the seriousness with which the government views it.

“We continue to affirm strongly and to manifest the strongest determination of all the Party, of all the people and of all the army in protecting Vietnamese sovereignty in maritime zones and islands of the country,” Dung said, in comments reported by the Thanh Nien daily.

He also reaffirmed “the incontestable maritime sovereignty of Vietnam towards the two archipelagos, the Paracels and Spratlys”.

After the late May incident China said Vietnamese vessels were operating “illegally” and urged the country to “refrain from creating trouble”.

Beijing says it is committed to peace in the South China Sea, but its more assertive maritime posture has caused concern among regional nations.

Tensions have also risen this year between China and the Philippines, another claimant to the Spratlys, where Malaysia, Brunei and Taiwan also say they have a stake.

At a regional security summit last weekend in Singapore, US Defense Secretary Robert Gates warned clashes may erupt in the South China Sea unless nations with conflicting territorial claims adopt a mechanism to settle disputes peacefully.

Hundreds of people held a peaceful anti-China protest outside Beijing’s embassy in Hanoi on Sunday, the largest action of its kind since 2007. Protests are rare in authoritarian Vietnam.