Evacuation of OFWs from Syria in full swing–DFA 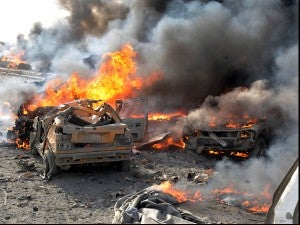 In this photo released by the Syrian official news agency SANA, flames and smoke raise from burned cars after two bombs exploded, at Qazaz neighborhood in Damascus, Syria, on Thursday May 10, 2012. Two large explosions ripped through the Syrian capital Thursday, heavily damaging a military intelligence building and leaving blood and human remains in the streets. AP

MANILA, Philippines – The government’s evacuation program for overseas Filipino workers in Syria remains in “full swing,” with the repatriation on Thursday of another 26 OFWs from the strife-torn Middle East country, according to the Department of Foreign Affairs.

The latest batch of repatriates brought to 1,460 the total number of Philippine nationals rescued by the DFA from Syria.

The foreign office said in a statement released on Wednesday that the OFWs were expected to arrive at the Ninoy Aquino International Airport’s Terminal 1 around 10:20 p.m. May 10 on board Malaysian Airlines flight MH 804.

“The repatriates, all of whom are women, were mostly from Damascus. Seven others were from Homs while two others came from Hama, areas worst hit by the violence in Syria,” said the DFA.

It also said the Philippine embassy in the Syrian capital “continues to negotiate for the immediate repatriation of more OFWs who are seeking shelter in its halfway house in Damascus as the conflict in the country persists.”

The mission has repeatedly appealed to the remaining 9,000-plus Filipinos in Syria, most of who are undocumented domestic helpers, to avail of the government’s mandatory evacuation programs.

In December, the DFA raised Crisis Alert Level 4, which calls for the mandatory evacuation of all Filipinos based in Syria.

The embassy is “working on the instruction of Foreign Secretary Albert del Rosario to fully and effectively implement Alert Level 4,” said Raul Hernandez, the DFA spokesman.

In a report to the home office, the embassy mission disclosed “the country’s honorary consulates in Aleppo and Homs have negotiated for the release of an undisclosed number of OFWs from their employment contracts.”

The embassy also said it was “exerting all efforts to mount daily repatriations and bring more of our kababayans out of harm’s way.”

“Airline seats have been difficult to come by as the exodus of foreigners, particularly Filipinos and Indonesians, has grown,” the embassy said.

From the Syrian capital, “most of our repatriates fly to Dubai before taking connecting flights to Manila. If these flights are fully booked, they fly via a third city, usually Bangkok,” the embassy added.

The DFA spends an average of $4,000 for the repatriation of each OFW, including air fare and exit visa fee.

From only 200-plus OFWs in February, more than 1,000 Filipinos have applied for inclusion in the repatriation program.

The new applicants include OFWs marooned in dire conditions in Homs and other protest hubs in Syria.

Del Rosario has described the repatriation of Filipinos in Syria as a “work in progress.”

“Repatriation involves negotiating with employers for their release, including buying out their contracts, dealing with immigration officials and paying the OFWs’ immigration-related fines, and in some cases being met with the challenges of having to extract them from areas considered as no man’s land,” Del Rosario explained.

He also said that unlike the United States embassy in Damascus, the Philippine mission would remain open “as long as we have OFWs there that need help.”

Majority of the remaining OFWs in Syria have ignored the government’s offer, prompting the DFA to intensify its efforts to reach out to them and convince them to leave the country.