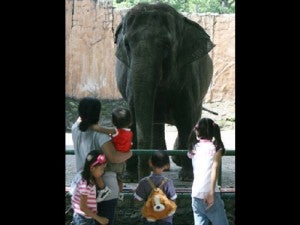 MANILA, Philippines—Rock icon Morrissey called on Philippine President Benigno Aquino on Thursday, ahead of a Manila concert, to send what the star described as Manila Zoo’s long-suffering elephant into retirement.

The British ex-singer of alternative rock group The Smiths said Mali, 37, deserved a reprieve from a lifetime of confinement.

“I ask that you send Mali to a sanctuary, where she would have room to roam and be able to be among other members of her own species,” Morrissey wrote ahead of his May 13 Manila show.

Aquino’s office received the letter Thursday and is evaluating it, his spokeswoman Abigail Valte told reporters.

Echoing allegations by the animal rights group People for the Ethical Treatment of Animals, Morrissey said Mali had been unable to roam and socialize unlike her cousins in the wild.

“Her life consists of extreme loneliness, boredom and isolation in an area that is a fraction of the size of her natural habitat,” he said, suggesting this could drive her to insanity.

PETA, which Morrissey supports, wants Mali shipped to a US sanctuary for old, sick or needy elephants that have been retired from zoos and circuses.

It was not the first time Aquino’s intervention had been sought over conditions at the nearly 53-year-old zoo.

Last year a college student’s blog about apparently mistreated zoo animals provoked an instant Internet global furor and forced Aquino to call on officials to look into their welfare.

Manila Zoo chief veterinarian Donald Manalastas insisted Thursday that contrary to allegations Mali, donated by Sri Lanka in 1980 after its parents were poached, was well and fit.

“We have expanded the enclosure of Mali and increased her food with more nutrients. We have proof and papers of what we feed her. We do not torture her,” Manalastas told AFP.