Philippines to assert ‘with firmness’ its claim to Spratlys 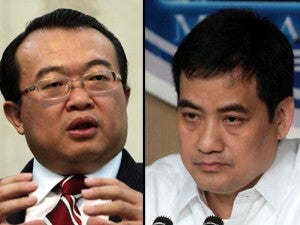 Ambassador Liu Jianchao and Presidential Spokesman Edwin Lacierda. The Philippines and China continue to trade jabs over the disputed islands in the West Philippine Sea. AP/INQUIRER

MANILA, Philippines—Malacañang on Thursday said it would assert “with firmness” its claim to the Kalayaan Group of Islands in the West Philippine Sea (South China Sea) as Manila and Beijing continue to trade jabs over the disputed region.

“The Philippines believes that its territorial rights must be asserted with firmness, its position reiterated at every appropriate opportunity, and in a manner befitting a free, sovereign nation…,” said Presidential Spokesman Edwin Lacierda.

President Benigno Aquino III last week said the Philippines would file a protest at the UN for at least six incidents of incursions in the West Philippine Sea, with one case where a Chinese vessel allegedly fired on Filipino fishermen.

But China’s ambassador to the Philippines Liu Jianchao also on Thursday branded Manila’s accusations of intimidation in the disputed Spratly islands as mere “rumors” or exaggeration.

“We are exercising jurisdiction over this area so we will do whatever is appropriate for us to do to exercise our jurisdiction,” the ambassador told a press forum when asked about recent incidents in the Spratlys.

“It’s rather unfortunate that this issue… started with a bad rumor,” Liu said, referring to reports such as one about two alleged Chinese fighter jets flying near a Philippine military plane in the Spratlys.

Lacierda maintained that the Philippines was “committed to a multilateral approach to the resolution of claims in the Spratlys.”

“The foundation for a lasting resolution of issues is the Declaration on the Conduct of Parties in the South China Sea,” he said.

Liu said China would always adhere to the 2002 pact among the claimants to refrain from actions that could inflame tensions in the area.

That agreement was signed by China and the 10-member Association of Southeast Asian Nations, which includes many of the other claimants.

Lacierda said that China “has publicly committed to a peaceful resolution of claims, and that it shares the desire of countries like the Philippines for stability in our region.”

US Defense Secretary Robert Gates warned on Saturday that clashes may erupt unless nations with conflicting claims adopt a mechanism to settle disputes peacefully.

The Spratlys, a reputedly oil-rich island chain, is being claimed in whole or in part by Brunei, China, Malaysia, the Philippines, Taiwan, and Vietnam. With Agence France-Presse