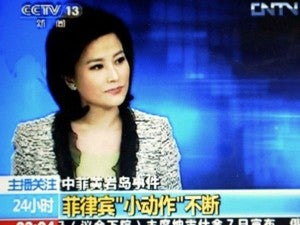 A TV grab from CCTV taken on May 7, 2012 shows He Jia, an anchor for China Central Television's (CCTV) nationally televised news broadcast, when she claimed the Philippines as part of China during a late broadcast that has been repeatedly replayed on the Internet. An anchor on China's state-run television broadcaster has declared the Philippines a part of China's sovereignty, as tensions between the two nations escalate over a South China Sea dispute. AFP PHOTO/CCTV

BEIJING, China – An anchor on China’s state-run television network has accidentally declared the Philippines a part of China, in an embarrassing gaffe as tensions between the two nations run high.

He Jia, anchor for China Central Television’s (CCTV) nationally televised news broadcast, made the claim during a late Monday broadcast that has been repeatedly replayed on the Internet.

The presenter apparently meant to say that the Huangyan islands — known in the Philippines as the Scarborough Shoal (Panatag Shoal), and claimed by both nations — is China’s territory.

“We all know that the Philippines is China’s inherent territory and the Philippines belongs to Chinese sovereignty, this is an indisputable fact,” He said in the broadcast, which has since disappeared from the CCTV website but is available elsewhere on the web.

Viewers joked in online postings that the presenter’s nationalistic fervour led to her mistake.

“This anchor woman is great, a good patriot, she has announced to the world the Philippines belongs to China,” said a microblogger named helenjhuang.

“We should attack directly, send (Philippine President Benigno) Aquino packing and take back our inherent territory.”

Another microblogger named kongdehua said, “the Philippines have basically been making irrational trouble, if they want to start a war then we will strike, no one fears them.

“If every Chinese spat once, we could drown (the Philippines).”

CCTV officials refused comment on He’s gaff when contacted by AFP and would not say whether the station had apologised.

When commenting on territorial disputes and separatist movements in Taiwan, Tibet, Xinjiang and neighbouring sea areas, Chinese diplomats and media routinely claim all such areas as an “indisputable part of China’s sovereignty and territorial integrity.”

Chinese Vice Foreign Minister Fu Ying said late Monday Beijing was ready for “any escalation” of the maritime standoff with the Philippines that has become one of the most high-profile flare ups over the West Philippine Sea (South China Seas) and its vast oil and gas deposits in years.