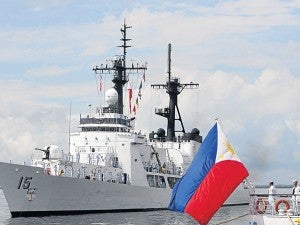 MANILA, Philippines—A second Hamilton class cutter will be turned over by the US Coast Guard to the Philippine Navy late this month, Navy chief Vice Admiral Alexander Pama said Tuesday.

The 45-year-old retired seacraft will be turned over by May 22 or 23, Pama told reporters in a phone interview.

He said the ship could arrive in the Philippines by November after refurbishments, repairs and training of crew in the United States.

Transfer cost will be about the same as its sister ship, the BRP Gregorio del Pilar, which cost the Philippine government about P450 million, Pama said.

He said that just like BRP del Pilar, some equipment will be taken out from the newest ship to join the Philippine fleet.

Among those removed from the BRP del Pilar before its transfer to the Philippine Navy were the sensors, communications and electronic equipment and close-in weapon systems.

On the 70th commemoration of Fall of Corregidor Sunday, President Benigno Aquino III announced that the new Hamilton ship will be named BRP Ramon Alcaraz.

The Q-112 Abra, manned by Alcaraz and his crew, brought down three of the nine Japanese “Zero” fighters attacking his boat, before being captured. In captivity, Alcaraz became head of the Prisoner of War camp in Malolos, making sure that his fellow POWs were kept hopeful and alive, said Aquino.