An unlikely hero for OFWs 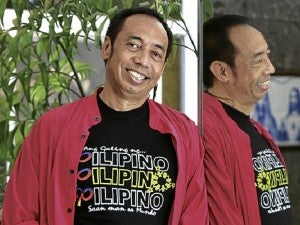 Maybe it’s his sad, droopy eyes, the tiny braid on his nape, or the approachable aura he projects in spite of his imposing height and celebrity. Whatever it is, Dyords Javier, the all-around entertainer who frequents Filipino communities abroad as one-fourth of the musical quartet Angfourgettables, has become an unlikely magnet of Overseas Filipino Workers (OFWs).

Occasionally, it’s a cry for help, like the time five downtrodden seamen in Dubai approached him before a concert in 2004 with the typical sad story of Pinoy contract workers—confiscated passports, salaries withheld by cruel bosses. “They said I was the only one who could help them,” recalls a bemused Javier, who patched them up with a community council leader. Weeks later, Javier was informed that the leader eventually took charge of sending the five seamen home, along  50 others with a similar plight.

Mostly, though, it’s to thank him for bringing in a free show that provides more than momentary escape for thousands of homesick Pinoys. “Ever since our yaya watched you guys perform, she’s been so happy,” said a friend of Javier’s who’s based in the Middle East. “Your show has been a big help to our community,” averred another OFW. “We’re now singing your song in our fellowship meetings!”

The song is “Ang Galing Ng Pilipino,” an inspirational piece written by Javier for the 1998 centennial celebration. While neither a songwriter, nor the first or second composer in mind for the project (his eldest brother, APO Hiking Society’s Danny, couldn’t do it; folk singer Gary Granada was not available), Javier managed to dash off something overnight and present it to Ryan Cayabyab (who supplied the melody) in time for the big event.

Angfour (that’s theater actress Isay Alvarez, singers Pinky Marquez and Bimbo Cerrudo, and Javier) recorded a reggae version, and Javier is reserving the ballad initially for himself, and then for other artists who believe in the song’s message and want to interpret it in their own way.

Today, the uplifting  anthem has become more than a fitting finale for Angfour concerts. It’s the name of the world tour and countrywide caravan that kicked off in Hong Kong’s Chater Garden on April 29 and unfolds in the Middle East, Europe, the United States and Asia.

It’s also a nonprofit organization which, among other things, presents OFWs with various entrepreneurial opportunities and business potential consultancy, as well as a chance to give back. Through a tie-up with Union Bank, donors can send pledges to Don Bosco’s Manpower Skills Training Center,  Tuloy Sa Don Bosco, and 16 other beneficiaries supported by the NGO. 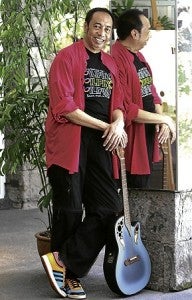 “FIND what it is that is good and great about you, and claim it!” says Javier. EDWIN BACASMAS

The slogan, of course, isn’t solely for or about the OFW: Javier is also tirelessly coordinating with various local government agencies to ensure the spreading of his advocacy. “The idea is repetition, saturation, actualization,” he explains. “It’s all a mindset. Believe in it, know it, find what it is that is good and great about you, and claim it! Be proud of it! Trust na magaling ka. When you are given that, anything is possible.”

Javier’s impassioned insights about life and Filipinos are a surprising revelation from a man whose career’s claim to fame includes being the originator of hip-hop in the Philippines (his early ’80s hit “Naonseng Delight” was sampled from Sugarhill Gang’s “Rapper’s Delight”), as well as roles in comedies like “A Man Called Tolongges ” and “Sagot Kita… Mula Ulo Hanggang Paa.”  The fourth of five kids, Jorge (he used Dyords when he was a columnist for the Manila Chronicle; George, meanwhile, is his screen moniker) attributes who he is today to his late father, a mining engineer-turned-farmer and the “Andok” of the popular Andok’s Lechon Manok chain owned by his brother Sandy.

“I was brought up in a way that I would eventually know  what is upright, what is respectability, what is love, and what is real giving,” he says. To this day, his core values remain intact: This is a man who will dutifully stop on a red light at 2:30 in the morning, or patiently explain to a taxi driver the consequences of throwing a candy wrapper on the street. “You know why? Because I believe that whatever I do affects people,” he explains simply of his actions. “If I want discipline to happen, it has to start with me.”

Married to Chiquita Bautista and the father of four kids aged 25, 22, 16 and 10, Javier keeps himself busy by running a slew of businesses: He owns an events company, a production company, and a trading company “which deals with the only fourth-generation LED lighting in the country and in the world!” he exclaims, affecting a salesman’s booming pitch.

“It saves you 70 percent on your electric bill, has a five-year warranty, is patented in 70 countries, and has accreditations from 12 international agencies!”

Will fans ever see him on TV and films again? “I’ll produce my own movie,” says Javier, who is self-diagnosed with Attention Deficit Disorder (“and  proud of it!” he adds). “If I make a movie, it will be on my own terms.”

That certainly explains why Javier, who, with his bright magenta shirt, multicolored sneakers, and spirited storytelling, belies the fact that he turns 59 in May.  Describing himself as “one grateful son of a gun,” he continues to play basketball and hang out with old friends.

“From Day One, I’ve always felt like I just graduated five years ago from college,” he shares with a grin. “When you wake up in the morning, you always have the option to decide: Will I be happy, or otherwise? Happiness is a decision,” he concludes. “Period.”

Read Next
Cagayanon doc is US town mayor
EDITORS' PICK
‘Opportunity’: PH senior population on the rise
Powered by style, innovation and passion
House starts inquiry into sugar import mess
Pimentel: Gov’t buyers knew of cheaper laptops but still got expensive ones
A laptop that maximizes your WiFi so you can maximize your productivity
House energy committee chair Arroyo bats for cheap electricity
MOST READ
Imee Marcos bares illegal importation of white onions
U.S. actor Anne Heche is taken off life support 9 days after car crash and dies
PVL: Celine Domingo gets big surprise as Creamline’s Finals MVP
Pimentel: PS-DBM knew of cheaper laptops but still got expensive ones
Don't miss out on the latest news and information.